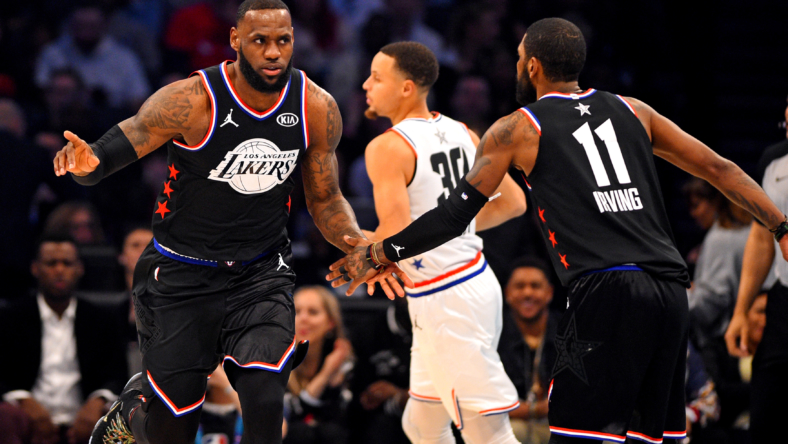 It wasn’t too long ago that LeBron James called out his former teammate Kyrie Irving for sharing a documentary through social media that included several antisemitic ideas.

Since then, Irving has been suspended by the Nets for a minimum of five games after the All-Star guard initially failed to apologize for sharing the video.

With Irving still sidelined, James has apparently changed his stance some. He took to social media on Thursday to show support for his former Cleveland Cavaliers teammate while calling for an end to the suspension.

“I told you guys that I don’t believe in sharing hurtful information. And I’ll continue to be that way but Kyrie apologized and he should be able to play,” LeBron James on Kyrie Irving suspension. “That’s what I think. It’s that simple. Help him learn- but he should be playing. What he’s asked to do to get back on the floor I think is excessive IMO. He’s not the person that’s being portrayed of him. Anyways back to my rehab session.”

This could vey well be James’ way of towing the company line. NBPA Vice President Jaylen brown just recently noted that he believes the union will appeal Irving’s suspension. It’s a position James himself held earlier in his career. He’s been extremely active from a union perspective and has close relationships with those leading the charge.

LeBron James change of tone when it comes to Kyrie Irving

It was just a few days ago that James seemingly blasted Irving for sharing the aforementioned video. He did not hold back in his criticism of his former teammate in Cleveland.

“Me, personally, I don’t condone any hate to any race, to Jewish communities, to Black communities, to Asian communities. You guys know where I stand. I believe what Kyrie did, did cause some harm to a lot of people. He has since, over the last — today, or was it yesterday — he apologized. But he caused some harm, and I think it’s unfortunate,” James on Irving from back on November 5.

“I don’t stand on the position to harm people when it comes to your voice or your platform or anything. So it doesn’t matter what color your skin is, how tall you are, what position you’re in — if you are promoting or soliciting or saying harmful things to any community that harms people, then I don’t respect it. I don’t condone it.”

For their part, the Nets gave Irving a a list of six tasks he must complete before returning to the court for the team.

At this point, it stands to reason that Irving has played his final game as a member of the Nets. While he has since issued an apology and met with NBA Commissioner Adam Silver, the damage done here might be too much to repair this relationship.

The backdrop here are rumors that persisted during the summer linking Kyrie Irving to the Lakers in trade talks. He has in the past indicated a willingness to play with James again after their falling out in Cleveland.

The Lakers find themselves with the second-worst record in the NBA at 2-9. They have lost four consecutive games by double digits. Meanwhile, James exited Wednesday’s loss to the Los Angeles Clippers with a groin injury.