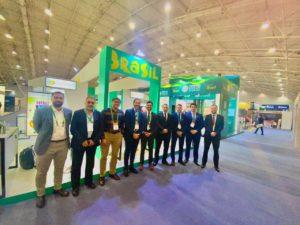 São Paulo – Brazilian participation stood out at the Saudi International Halal Expo , which took place from Monday (7) to Wednesday (9) in Riyadh, Saudi Arabia, with six companies and two halal certifiers from Brazil. The show had its first edition this year, and Brazil stood out as a halal supplier. Halal goods are produced according to the guidelines of the Islamic religion. 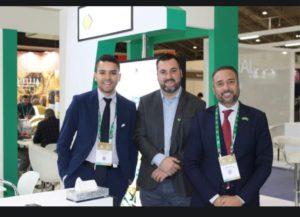 Brazil at the halal show

Six companies with a wide range of halal foodstuffs participated in a space organized by the Arab Brazilian Chamber of Commerce (ABCC) and the Brazilian Trade and Investment Promotion Agency (ApexBrasil) as part of the Halal do Brasil project, which aims to increase Brazil’s participation in the global halal market, especially with higher value-added foods and advancing out of commodities. 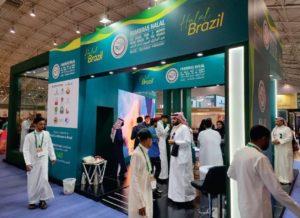 Fambras was a show sponsor

The companies that exhibited as part of Halal do Brasil were Petruz (açaí berries), Comesul (sheep and beef), and trading companies Pantanal Trading, Garra Internacional, Nad Al Shiba, and SCG. Outside project companies, Brazilian certifiers Cdial Halal and Fambras Halal also had stands at the show. Fambras Halal is the halal certification branch of the Federation of Muslim Associations of Brazil (FAMBRAS) and was the main sponsor of the Saudi show. 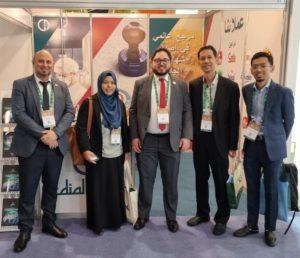 The secretary-general & CEO of the ABCC, Tamer Mansour, participated in the opening days of the show and said the Saudi Halal Expo, as it is very segmented, brought promising contacts for Brazilian companies, especially with Saudis and Omanis. He realizes the companies were much satisfied. The show’s first edition was not massive, but Mansour believes it will grow and is here to stay. The director of ABCC’s international office in Dubai, Rafael Solimeo, also attended the show and stated that Brazilian companies highlighted Brazil’s halal supply with their many spaces. 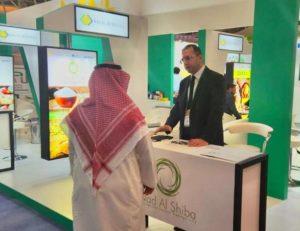 The Business Development manager at trading company Nad Al Shiba, Hassan Hamdan, said the show was an excellent opportunity to build a network of contacts and find new customers in the Saudi market. The trading company specializes in sugar and coffee trading from Brazil. Representing the Comesul meatpacking company, Gustavo Neumann said, despite being the first edition of the show and not yet very big, he made many contacts he hopes to develop in the coming weeks.“We hope to come back next year and visit the customers we acquired at this show,” he said. 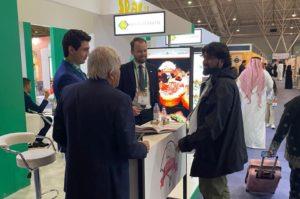 Visitors at the company stands

With the mission of opening up the Saudi market to açaí berries, Petruz’s sales director, Rafael Ferreira, participated in the Saudi Halal Expo. According to him, there is a powerful connection between the region and açaí due to the climate, and the event was a showcase. For Ferreira, participation was the first step towards this market, and the location of the Brazil pavilion gave the booths a lot of visibility.“We made great contacts, and now we hope they turn into business in the future,” said Ferreira.

Fambras Halal presented its latest innovation at the show, Sys Halal, a multiplatform cloud system for managing and tracing halal facilities and products. Sys Halal is composed of the modules Halal Certification for managing certificates, Management and Assurance of Halal Processes, which controls everything from the audit to the issuance of the certificate for the production plants and shipment, and Traceability, with information on the stages of the production chain of some halal products. Cdial Halal’s participation aimed to strengthen ties with regional entities and trade relations between Brazil and Saudi Arabia, prospect new business, and exchange information on market trends.“We participated in the meetings with the main supermarkets in the region to present Brazilian products to these potential buyers,” said one of the certifier’s representatives at the show, Operations director Ahmad Saifi. According to him, Cdial Halal is working together with companies to find a way to reach these supermarkets.