A Window into the Past

In 2021, UNESCO added Sannai Maruyama along with 16 other prehistoric Jōmon sites in Hokkaidō and northern Tōhoku to its World Heritage list. The sprawling site in the city of Aomori in Aomori Prefecture spreads across 42 hectares of land along the Okidate River that is estimated to have been inhabited from approximately 5,900 to 4,200 years ago. Relics of the past excavated at the site include ruins of dwellings and other structures, garbage mounds, and graves.

The Jōmon period began some 16,500 years ago and lasted until around 300 BC. The people inhabiting Japan during this time engaged in hunting, gathering, fishing, and cultivation, although there was no organized agriculture or raising of livestock as with many contemporary cultures in other regions of the world. The Jōmon people made use of earthenware, stone tools, and implements like bows and arrows, formed small settlements, and would even trade over great distances with other communities. Pottery and other artifacts unearthed at the sites also show they had an elaborate spiritual culture. 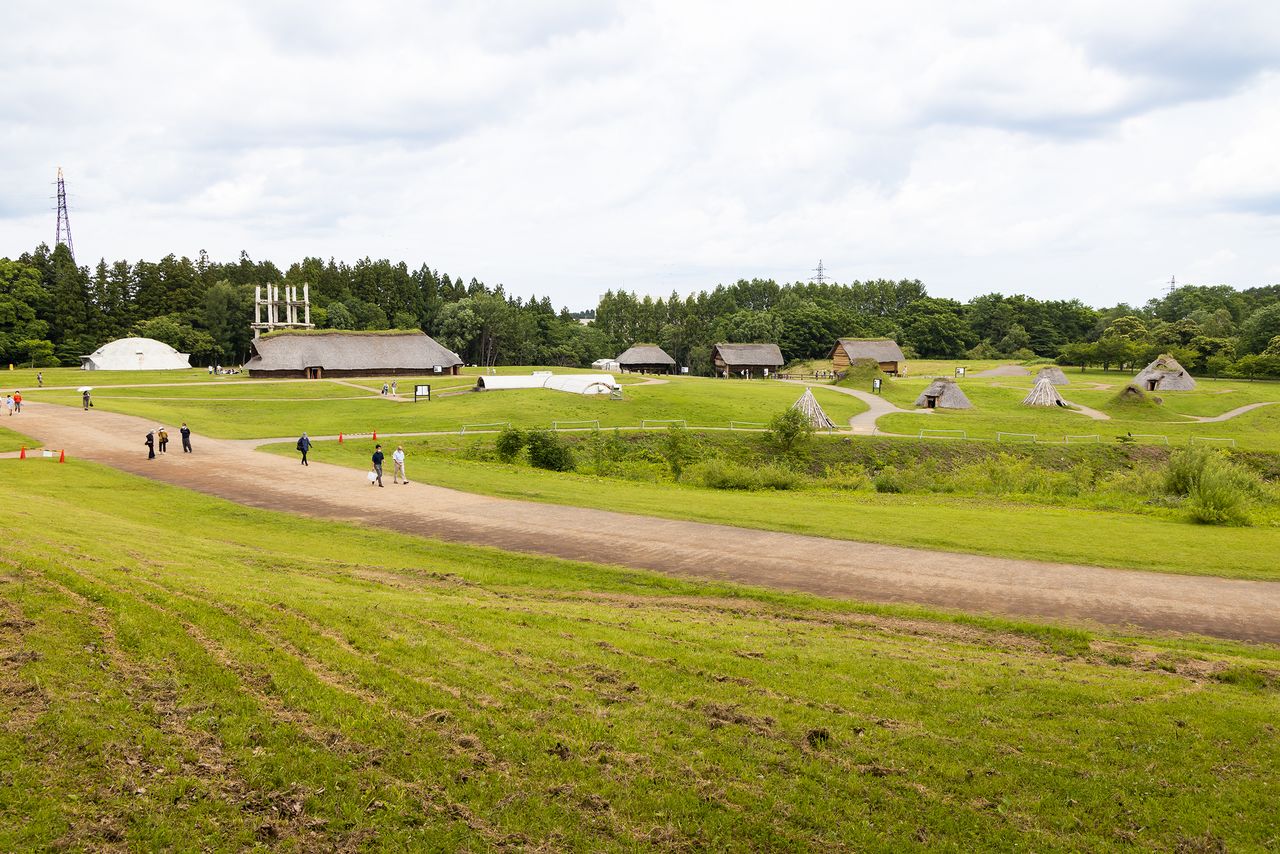 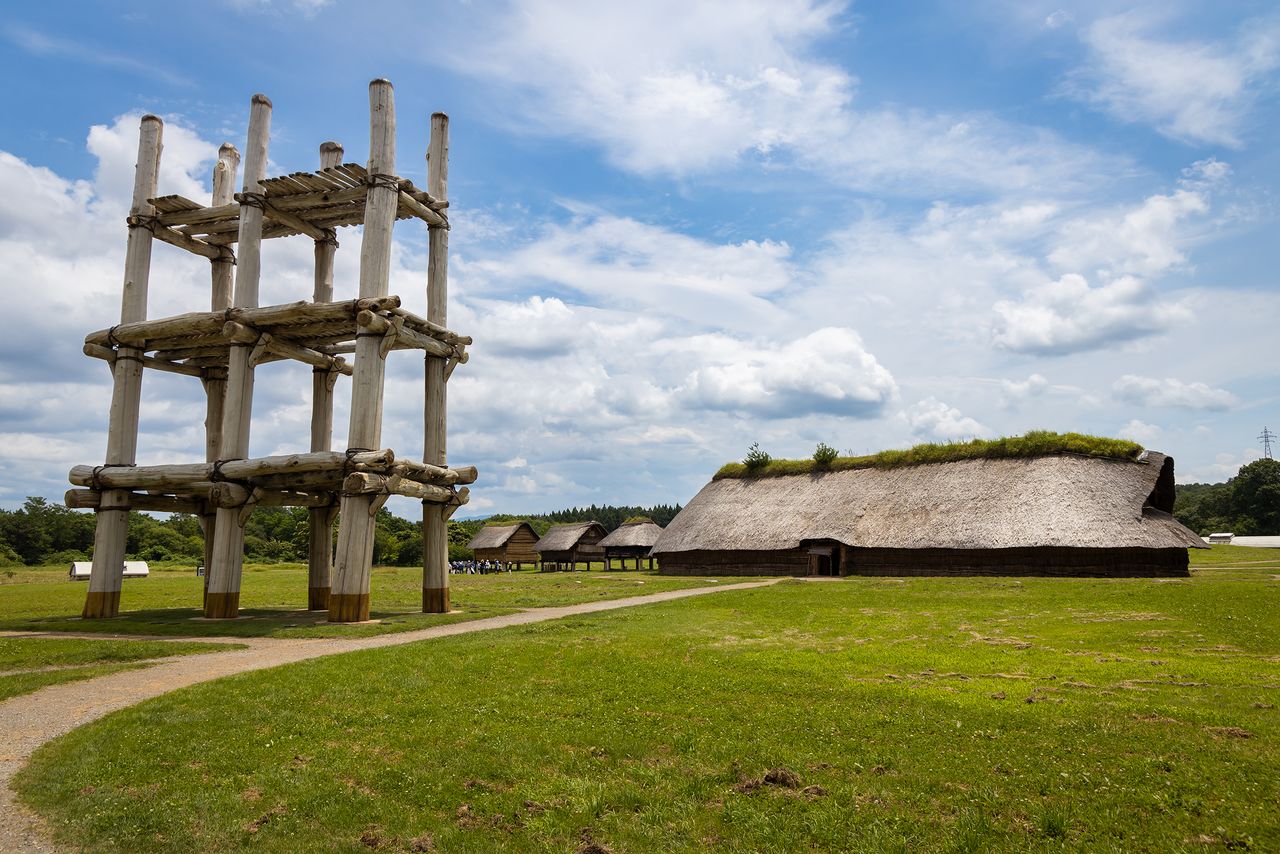 Excavation at Sannai Maruyama got underway in 1992 and has added greatly to the understanding of Jōmon culture. The site was discovered by accident during groundwork on a new baseball park. Located around three kilometers southwest of JR Aomori Station, it has become a popular tourist destination. A visit to Sannai Maruyama provides visitors the opportunity to explore Japan’s ancient past through recreations of pit dwellings and other buildings, exhibits of artifacts at the Sanmaru Museum, and hands-on activities. 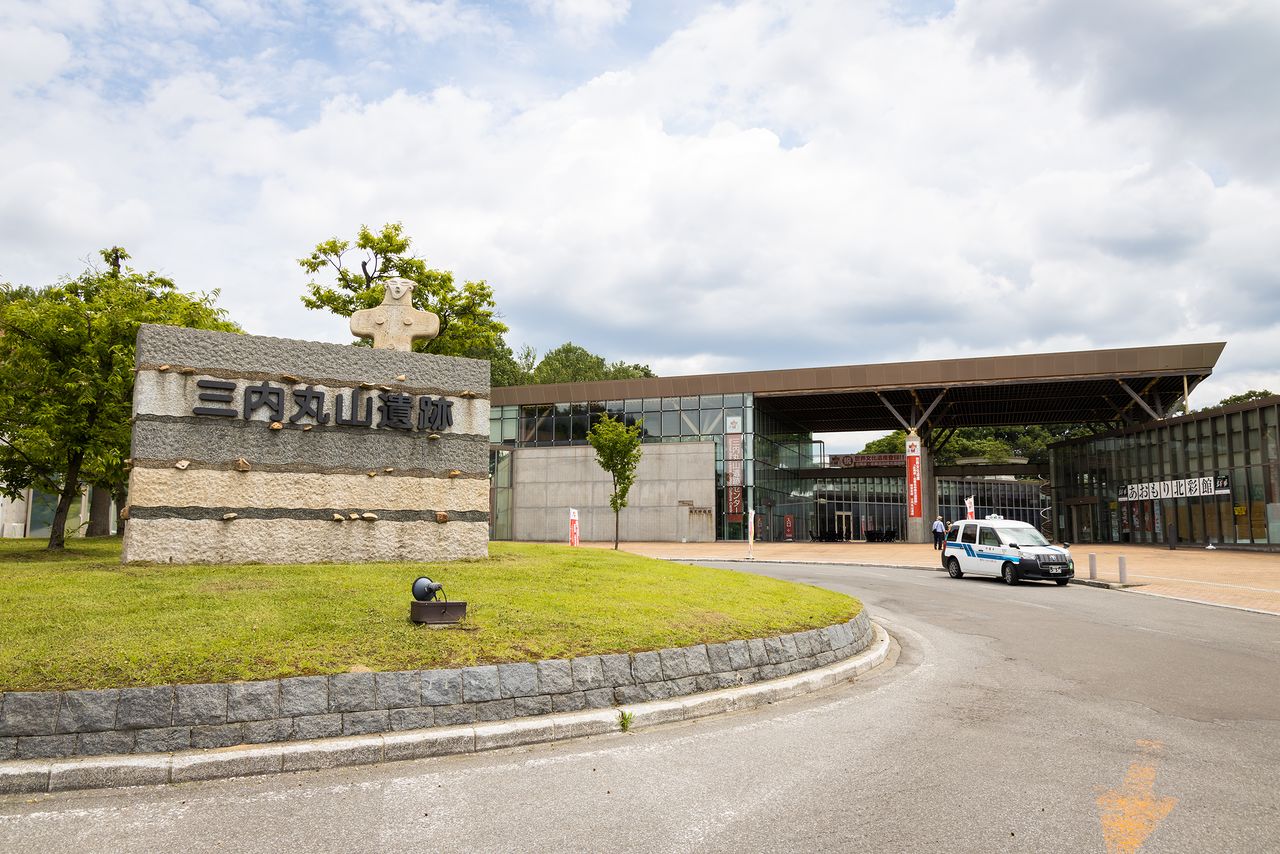 The front entrance of the Sannai Maruyama site. 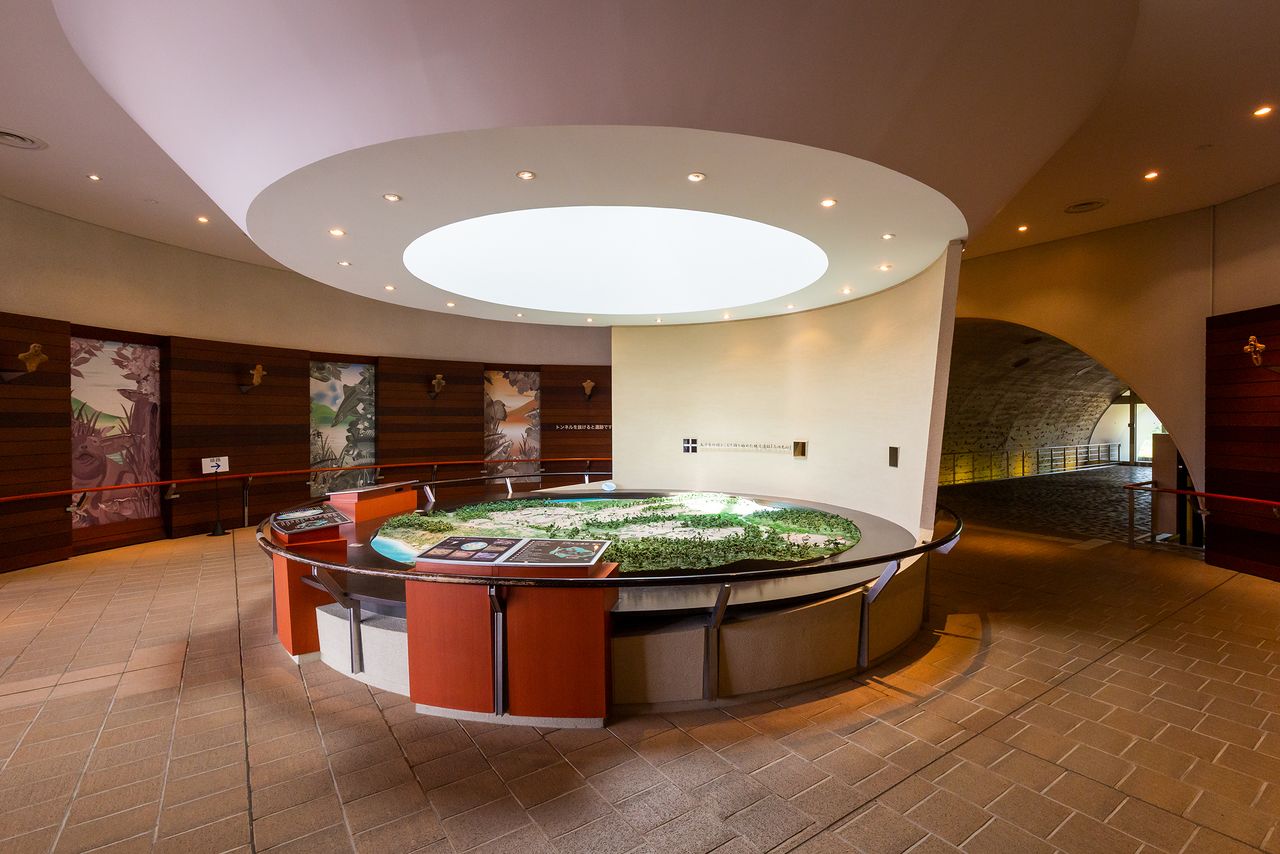 A diorama of the site greets visitors at the entrance of the Sannai Maruyama Jōmon Culture Center.

A Treasure Trove of Artifacts

Records of pottery and other artifacts being unearthed at the Sannai Maruyama site date back centuries. The 1565 work Eiroku nikki, for instance, notes that earthenware and clay figures were discovered at the village of Sannai. However, the site received little attention from modern archeologists until plans to expand a prefectural sports park revealed it to be a large-scale Jōmon settlement.

Excavation of Sannai Maruyama brought new and startling revelations about the Jōmon people. The harsh northern climate dictated many aspects of the lives of inhabitants, including when and where they could hunt. But findings including evidence of chestnut cultivation and the brewing of alcoholic drinks from fruits along with the discovery of a wide variety of fish bones showed that residents were able to take advantage of the abundant natural surroundings to settle permanently at the site. 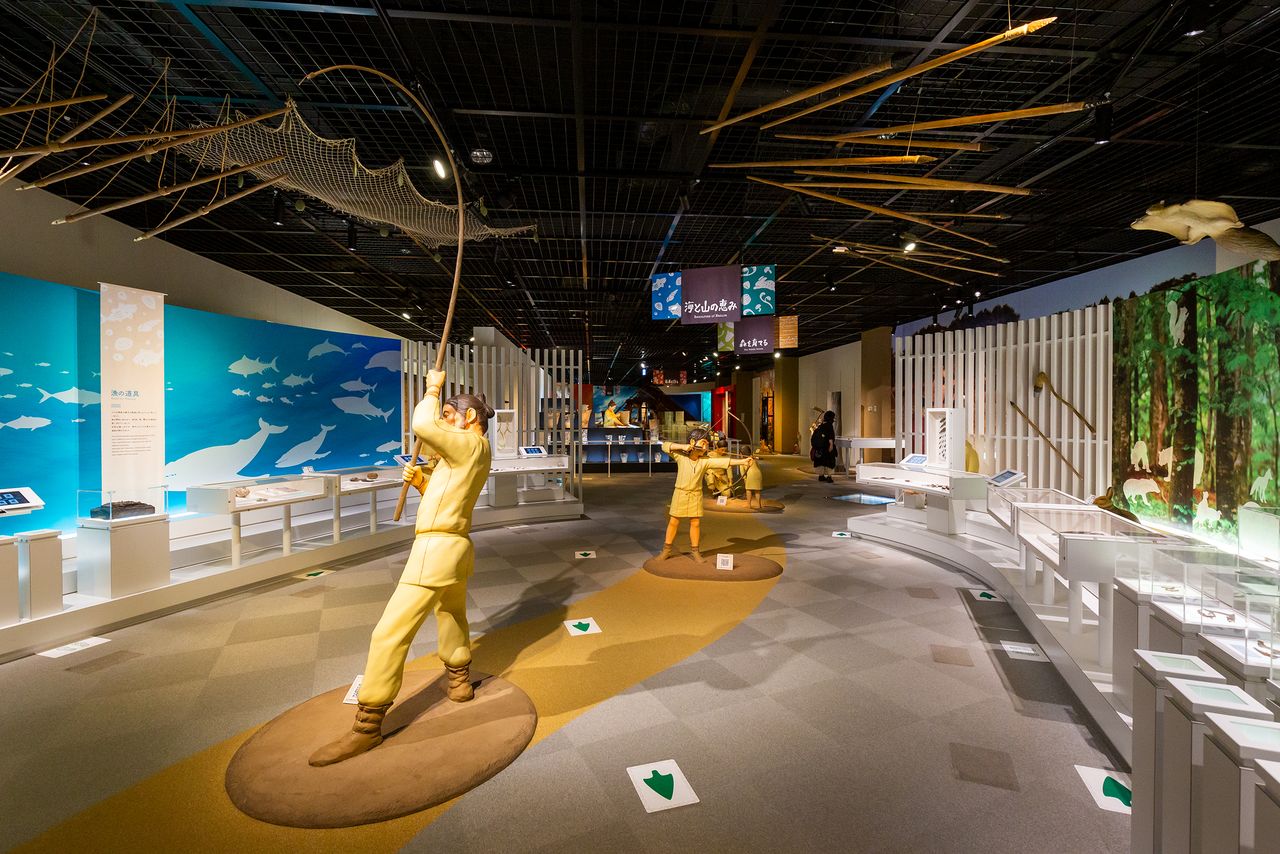 An exhibit at the Sanmaru Museum recreates life during the Jōmon period. 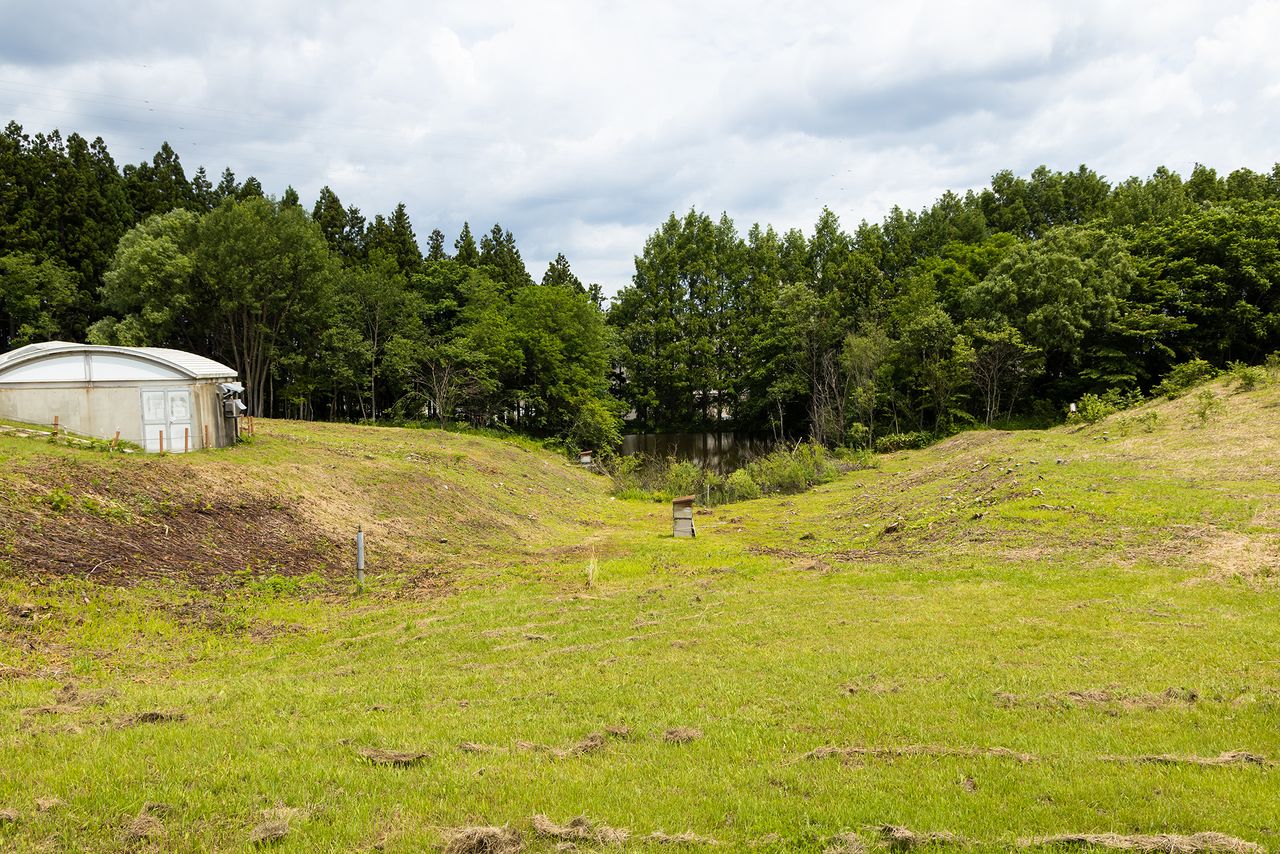 The Kitanotani midden. Cool, wet soil conditions at the garbage mound aided in preservation of artifacts. Excavation of the midden uncovered refuse of domestic life like lacquerware, wooden utensils, nuts and seeds, and animal and fish bones. 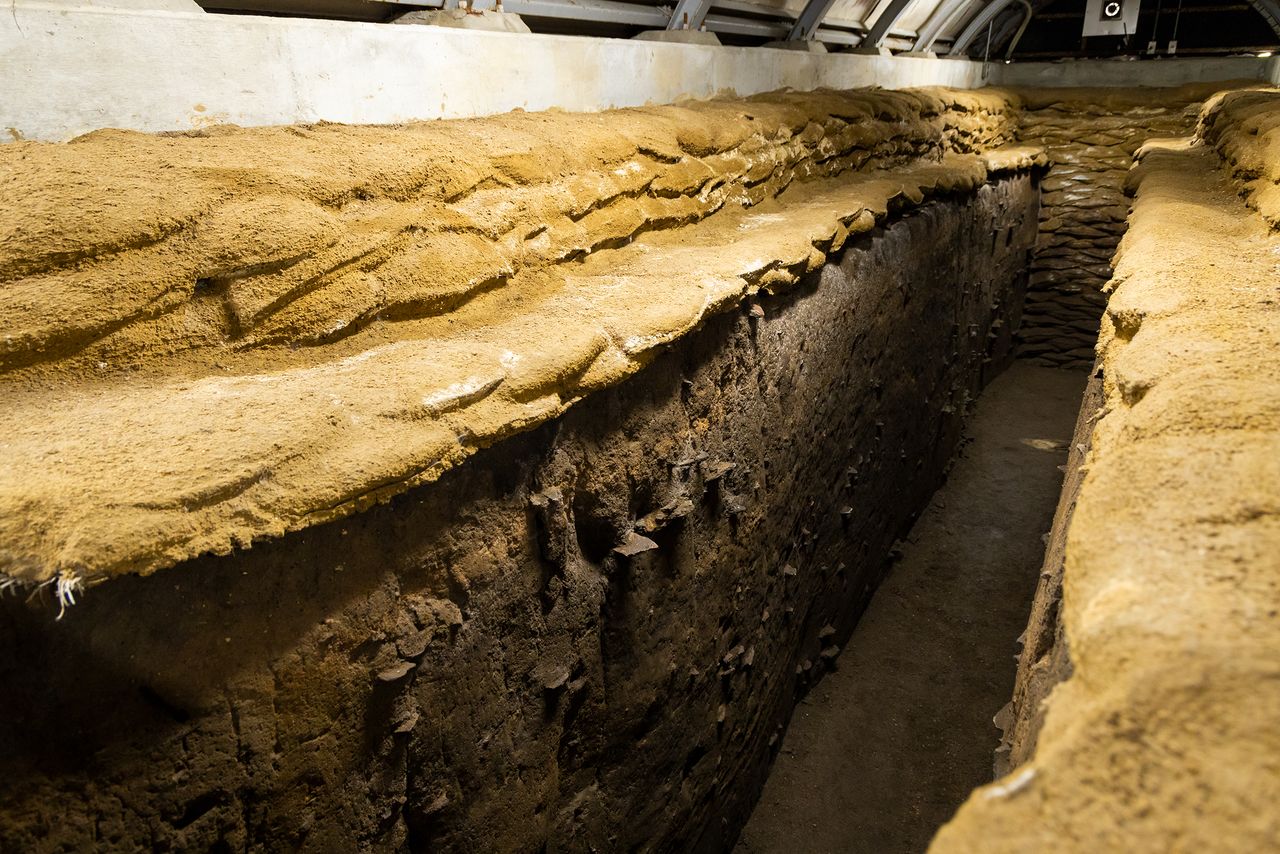 An exhibit showing artifacts in different layers of soil.

Traces of around 650 pit dwellings have been unearthed at the site, the largest measuring 32 meters long and 9.8 meters wide. Experts estimate that the ancient settlement could have supported as many as 500 individuals. A 12-meter-wide track extending 420 meters through the village was also uncovered and is thought to have linked Sannai Maruyama to the coast. Excavation of the numerous graves lining the road have revealed burial items like arrowheads and handcrafted pendants.

The discovery of artifacts made of obsidian from Hokkaidō and the island of Sado along with Jade from Itoigawa in Niigata Prefecture and amber from Kuji in Iwate Prefecture show that the settlement was far from isolated, but part of a far-flung trade network. 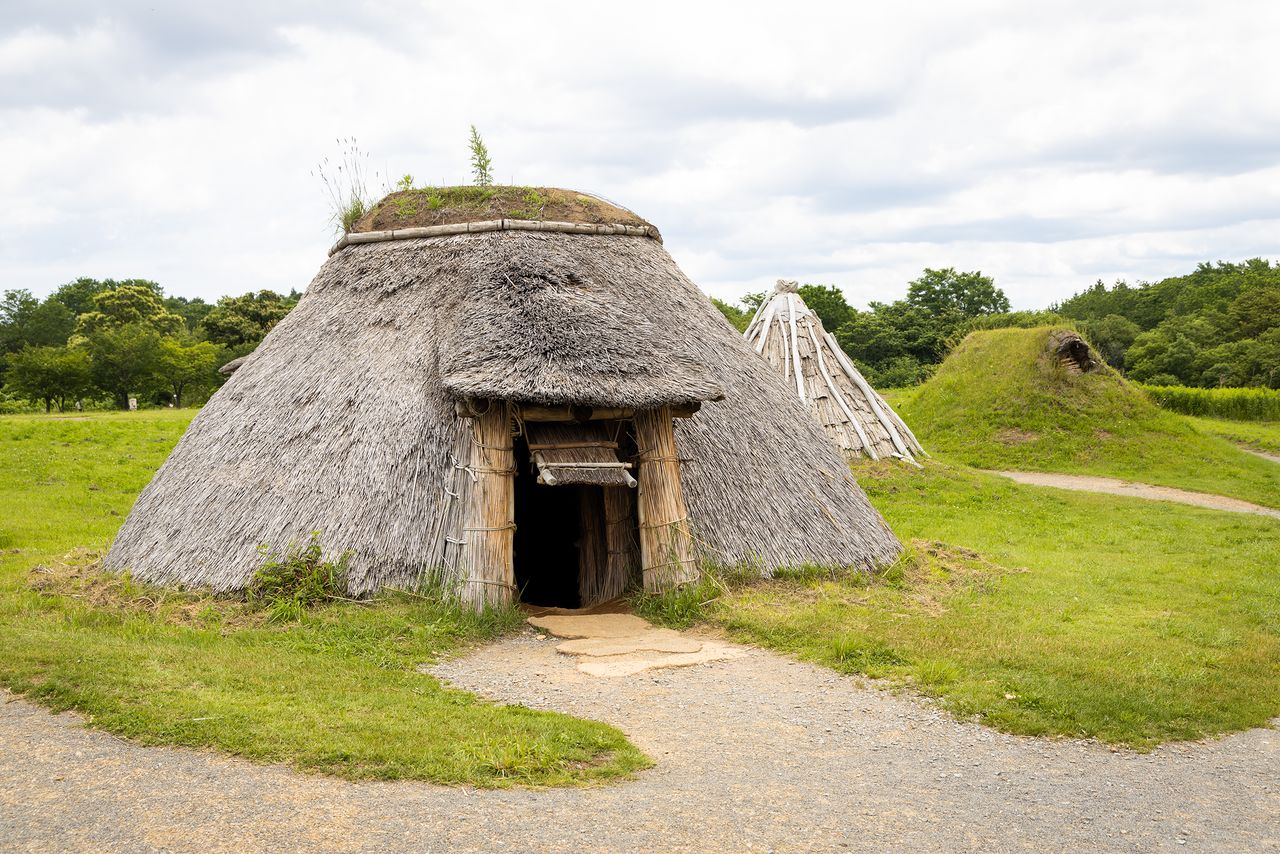 A reconstructed pit dwelling. These simple residences feature a fireplace in the center of the floor. 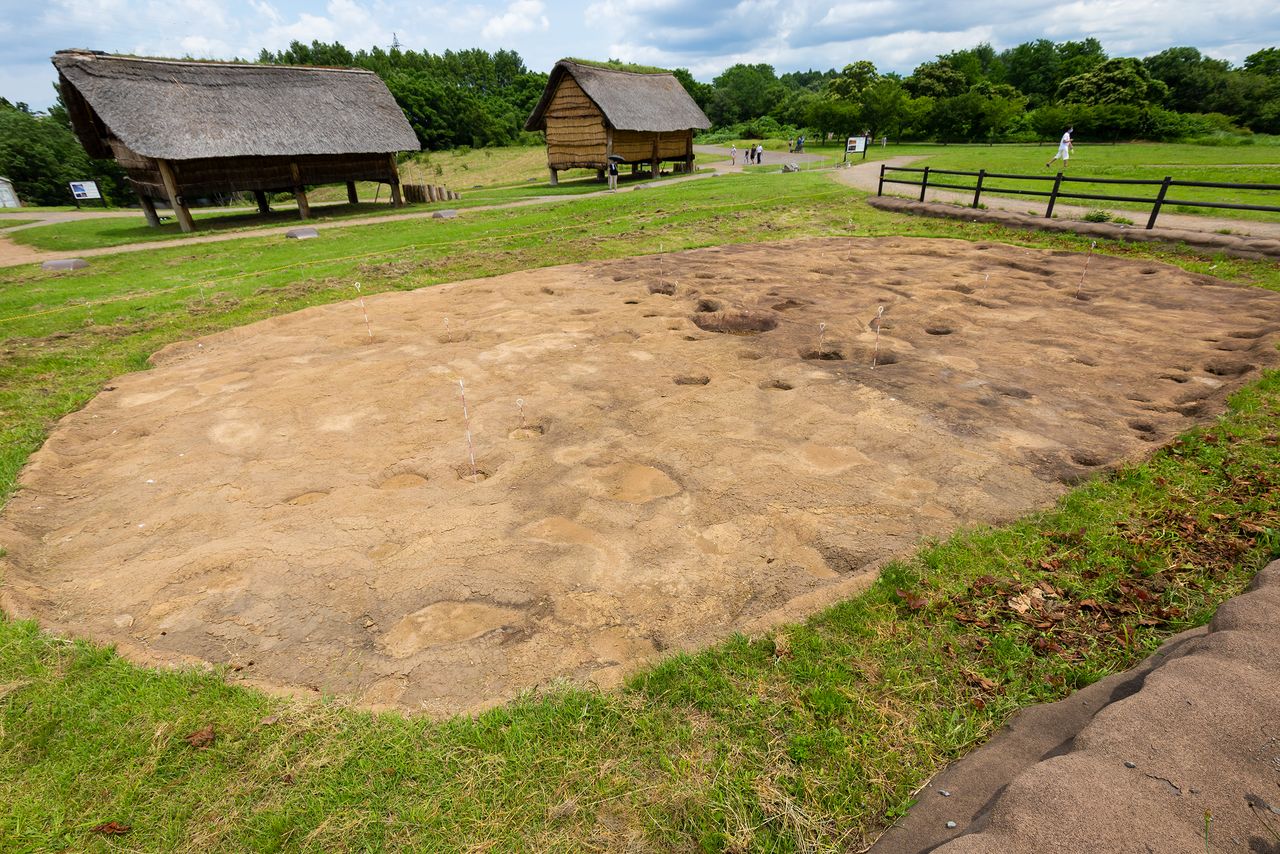 The remains of a large pit dwelling. It is thought that these large structures also served as communal meeting and work spaces. 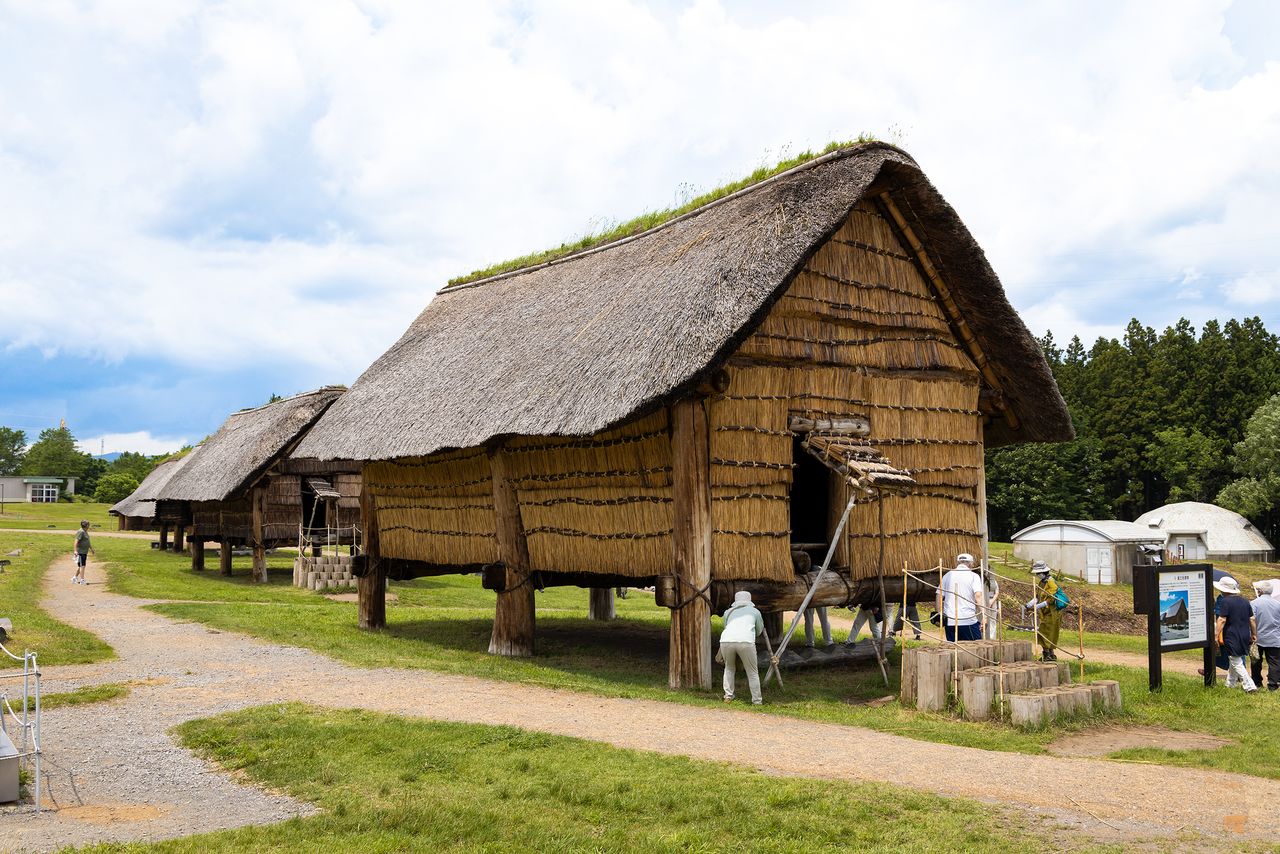 A group of reconstructed raised, pillar-supported buildings at Sannai Maruyama. 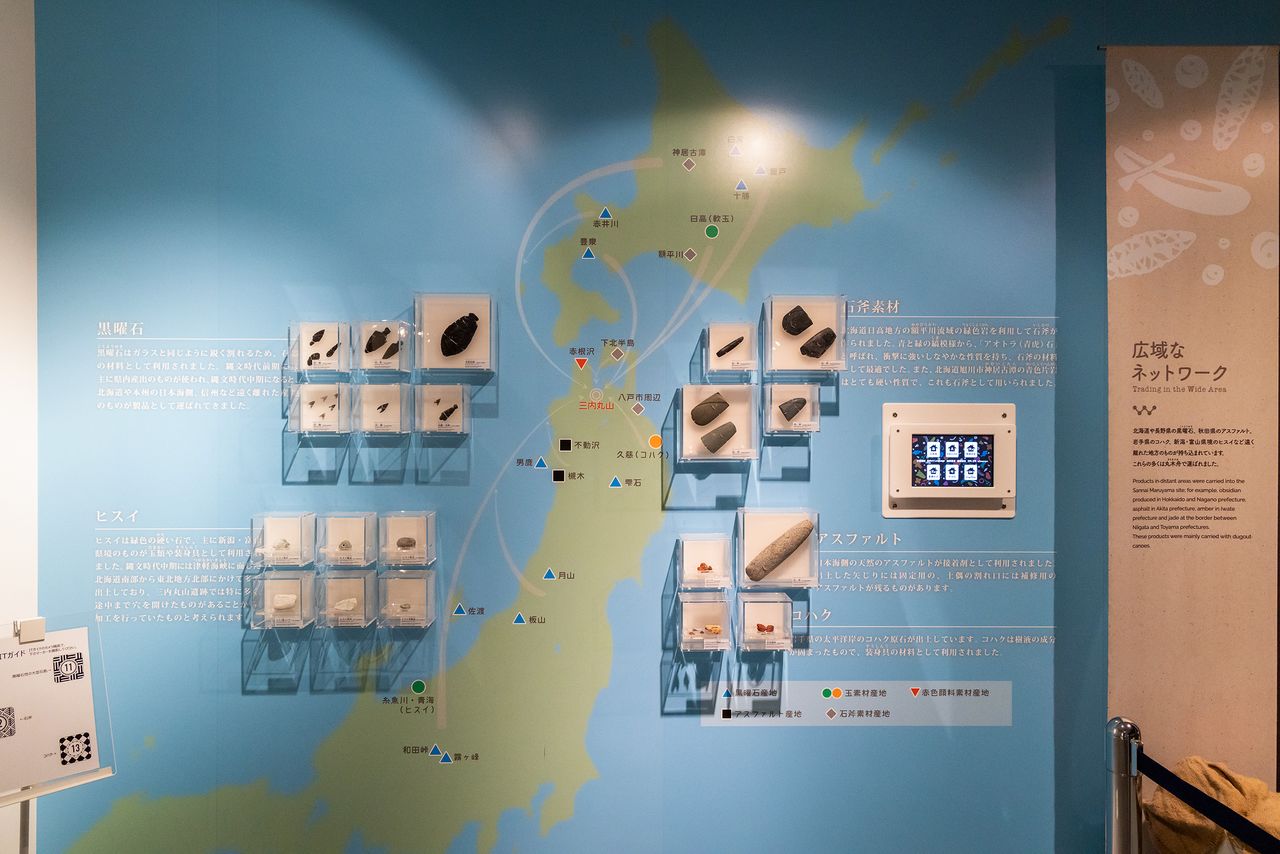 The origin of many artifacts excavated at Sannai Maruyama show the settlement was part of a broad trade network encompassing northern Japan and Hokkaidō.

The most groundbreaking find at the site was the discovery of pillar holes of a large structure estimated to be 20 meters tall. The six holes were aligned in parallel lines of three and were spaced 4.2 meters apart, providing evidence that builders of the structure employed sophisticated surveying techniques. Several of the holes contained the remnants of pillars of chestnut wood measuring one meter in diameter that had been purposefully scorched at the base to guard against the damp soil, an effective measure that also helped preserve them into modern times. It is unclear what purpose the building served, but some theorize that the structure had ritual importance. Whatever its role, the scale of the structure provides proof of the technical skill of Jōmon builders. 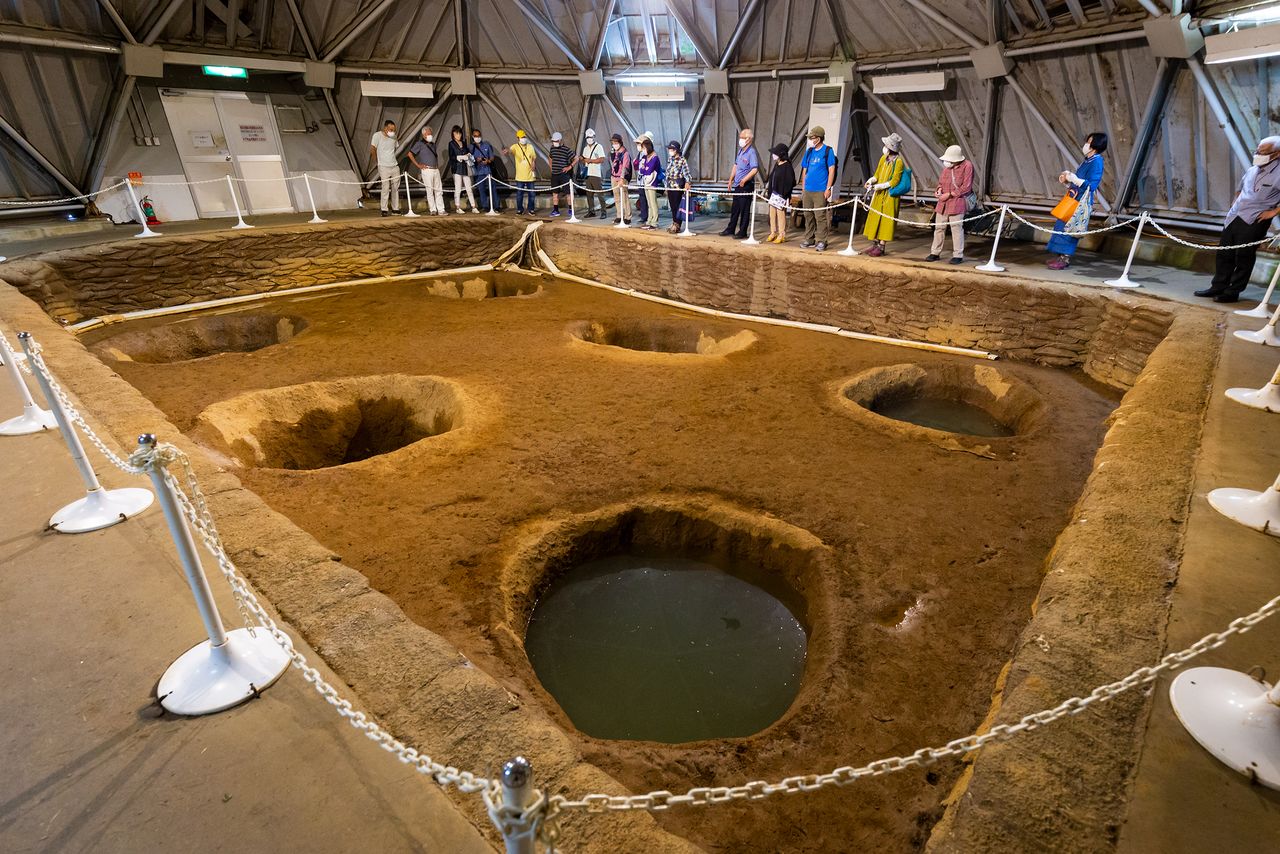 Visitors can view the pillar holes, which are preserved inside a protective dome. 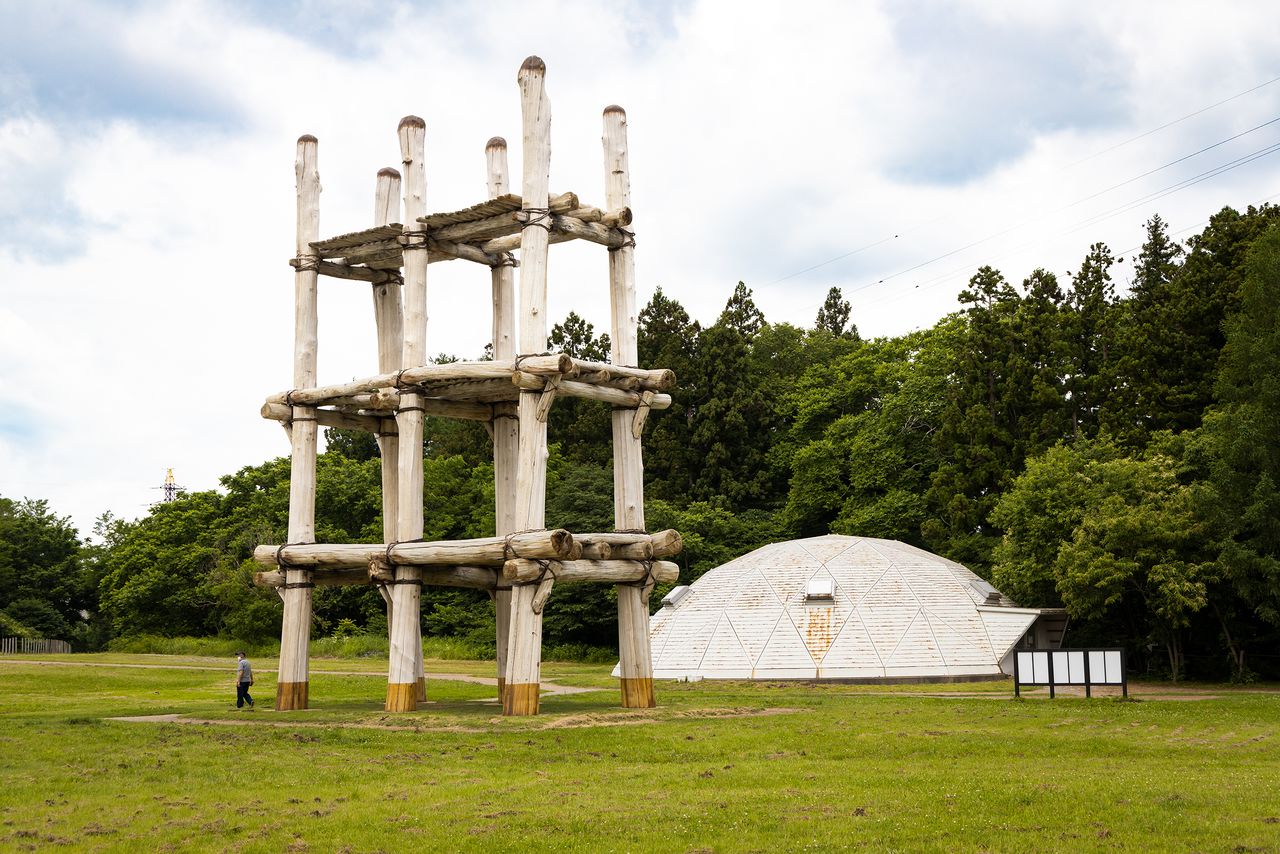 A reconstruction of the pillar-supported building stands next to the original site of the structure.

The discovery of the pillar holes in 1994 grabbed headlines and sparked national interest in Jōmon culture. In response, Aomori Governor Kitamura Masaya quickly moved to quash plans for the baseball field and switched focus instead to preserving and studying the site. In 2000, the national government awarded Sannai Maruyama special historical status, and over the next three years some 2,000 artifacts excavated at the site were designated important cultural properties; these would later provide the impetus for UNESCO listing. 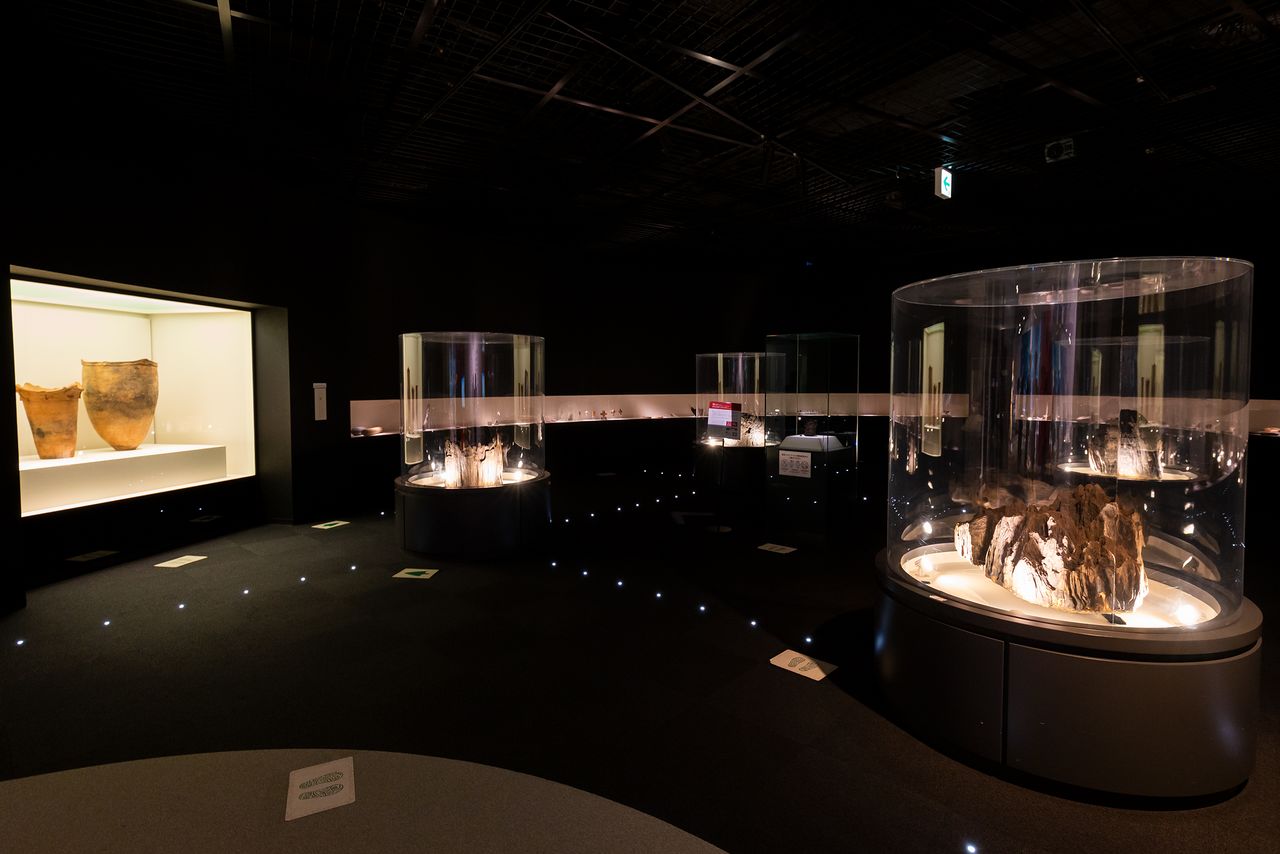 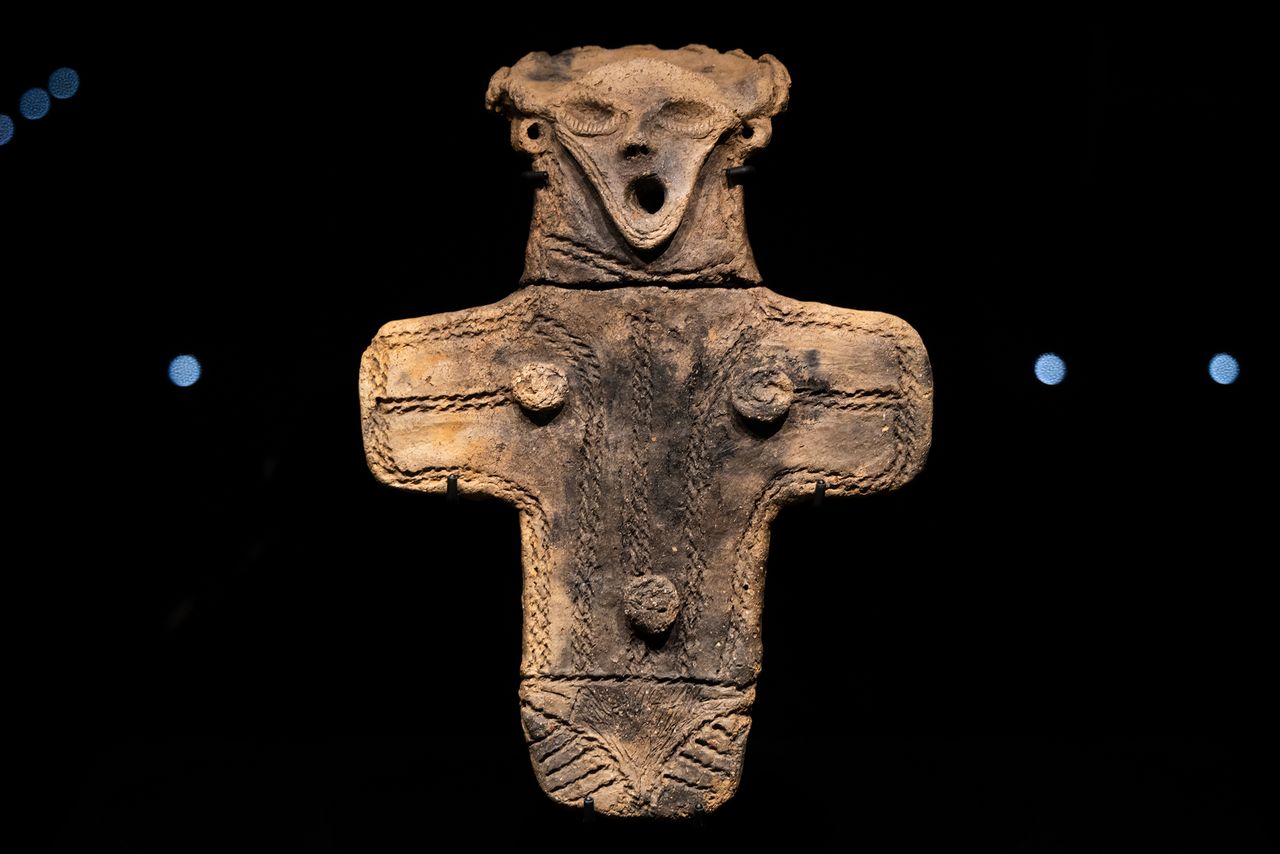 A large, flat clay figurine unearthed at Sannai Maruyama. Designated an important cultural property, it is one of the site’s most recognized artifacts.

Visitors to Sannai Maruyama can explore the site on their own, but joining one of the free guided tours, which are available on request in English, is recommended in order to get a better understanding of the significance of the site. Tours last around an hour and are run by volunteer guides who provide information about how Jōmon people lived, early excavation work, and other fascinating details.

Experts are still trying to form a full picture of life at the sprawling settlement. Excavation work continues and new discoveries are regularly made, helping expand the understanding of Jōmon culture. 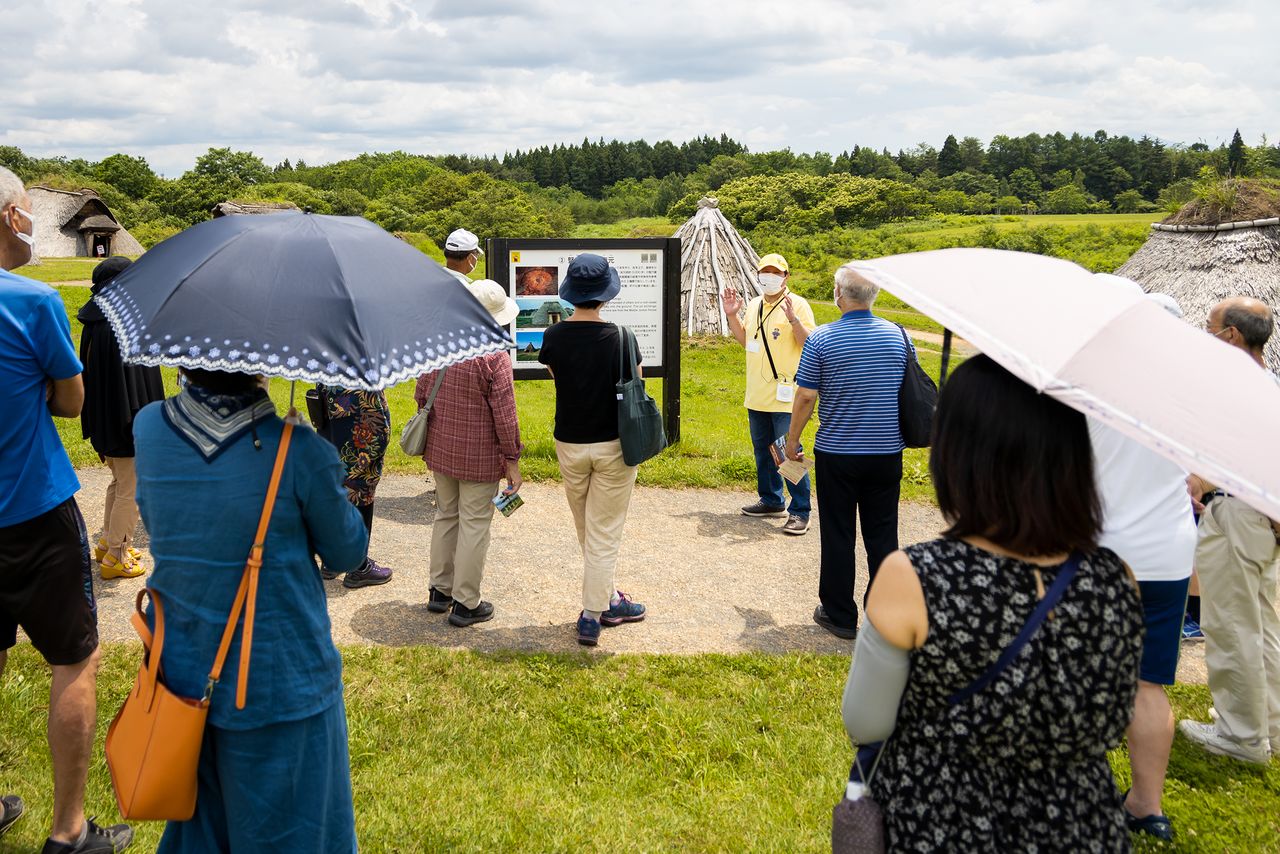 Participants of a guided tour. Many guides also take part in excavation work, providing them a unique insight into the history of the site. 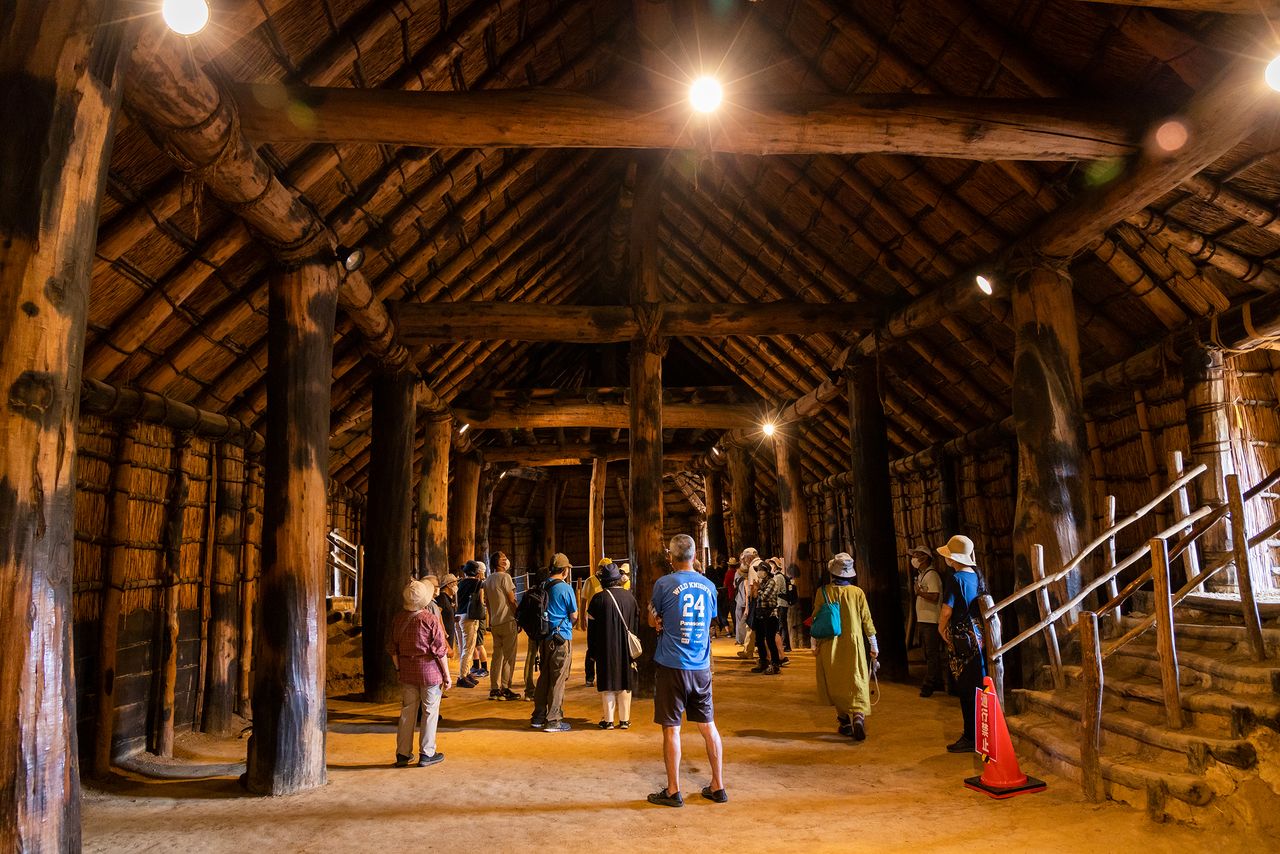 Tours include the inside of reconstructed pit dwelling and other structures, giving participants a close-up look at life in the Jōmon period.

After touring the grounds, visitors can move on to the Sannai Maruyama Jōmon Culture Center to view exhibits of artifacts at the Sanmaru Museum, including some 500 archeological items that are registered important cultural properties. Along with exhibits of artifacts, there are large panels and life-sized models detailing the daily activities of Jōmon people that help bring Japan’s ancient past to life.

Across from the museum is the facility’s glass-walled workroom, where visitors can watch as workers restore and reconstruct excavated artifacts. Nearby is a replicated cross section of one of the site’s mounds containing over 5,000 pieces of pottery in the different strata. 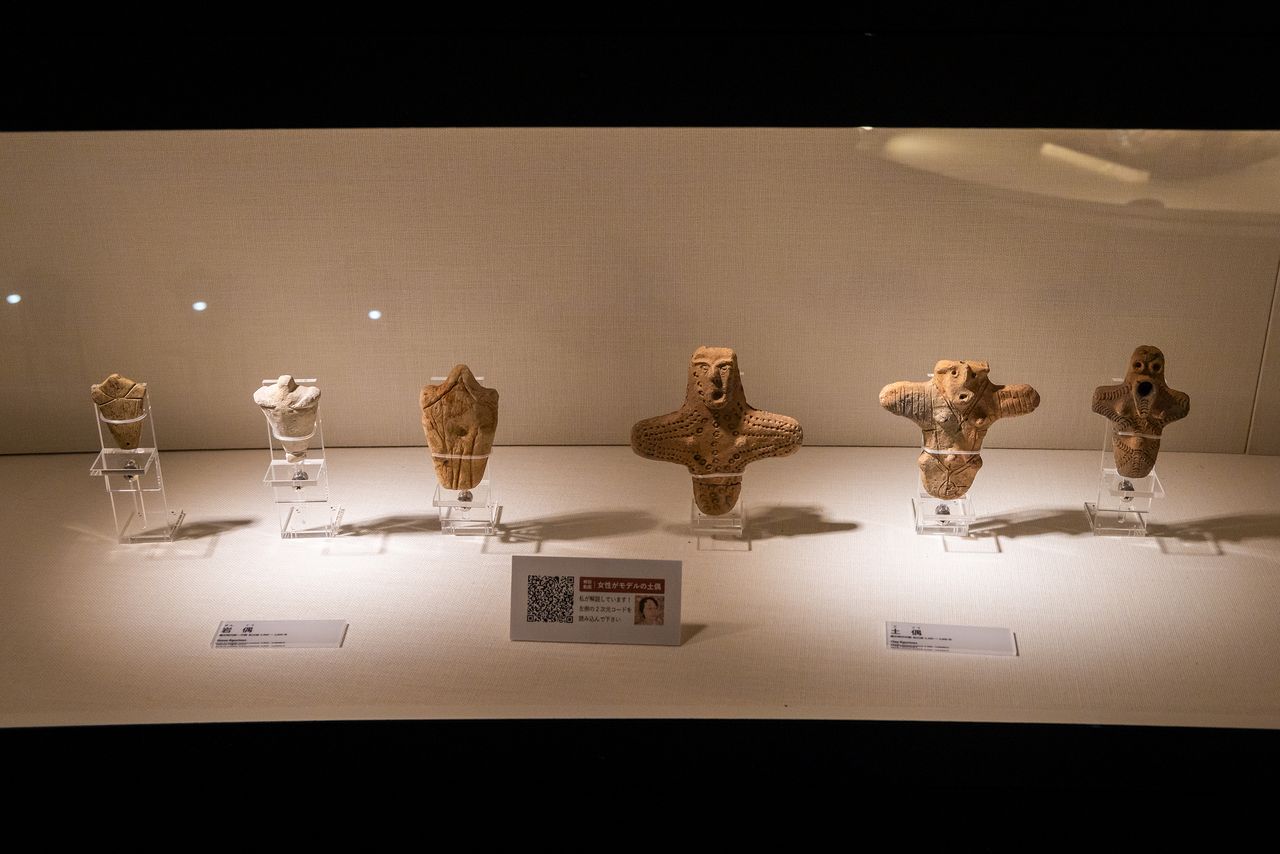 QR codes at exhibits allow visitors to access audio and visual explanations of pieces on their smartphones and other devices. 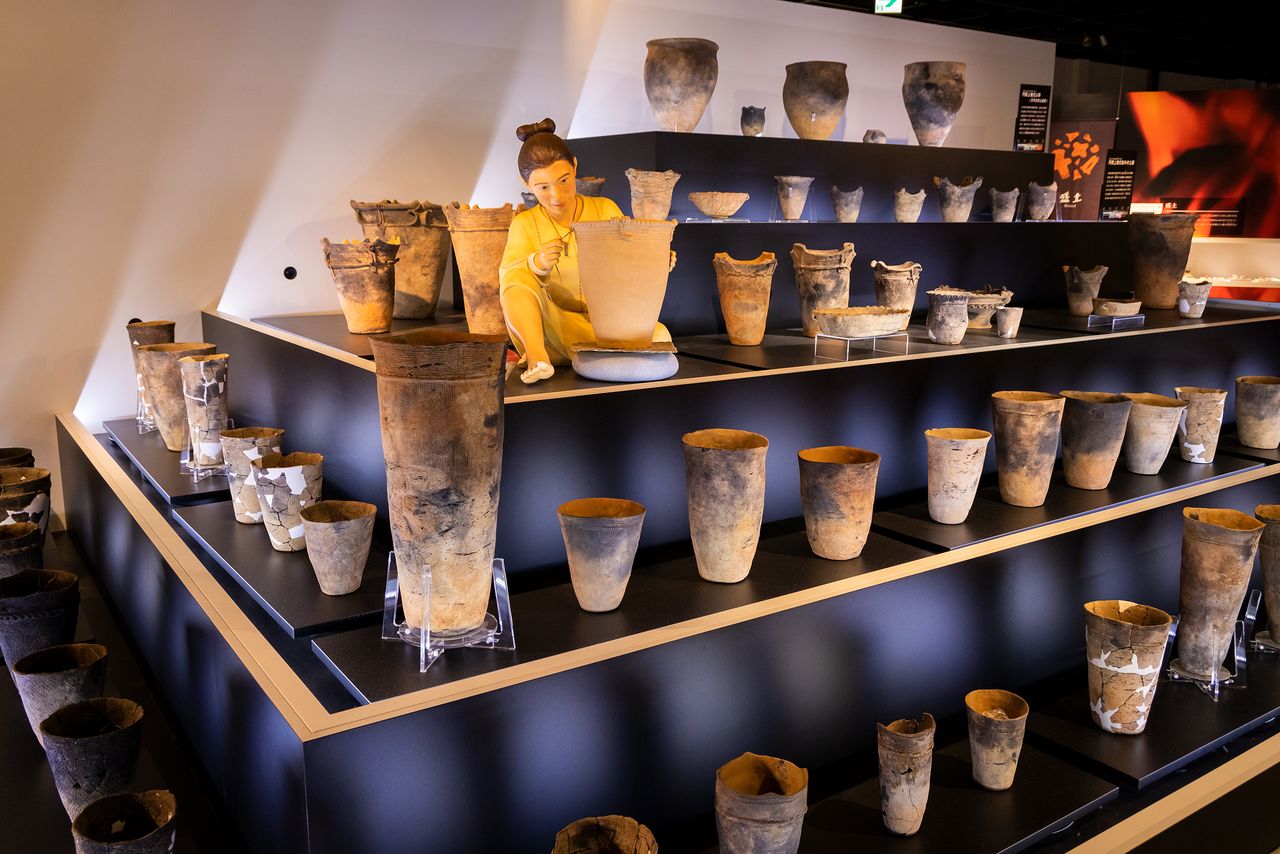 An array of earthenware pots makes for an impressive display. 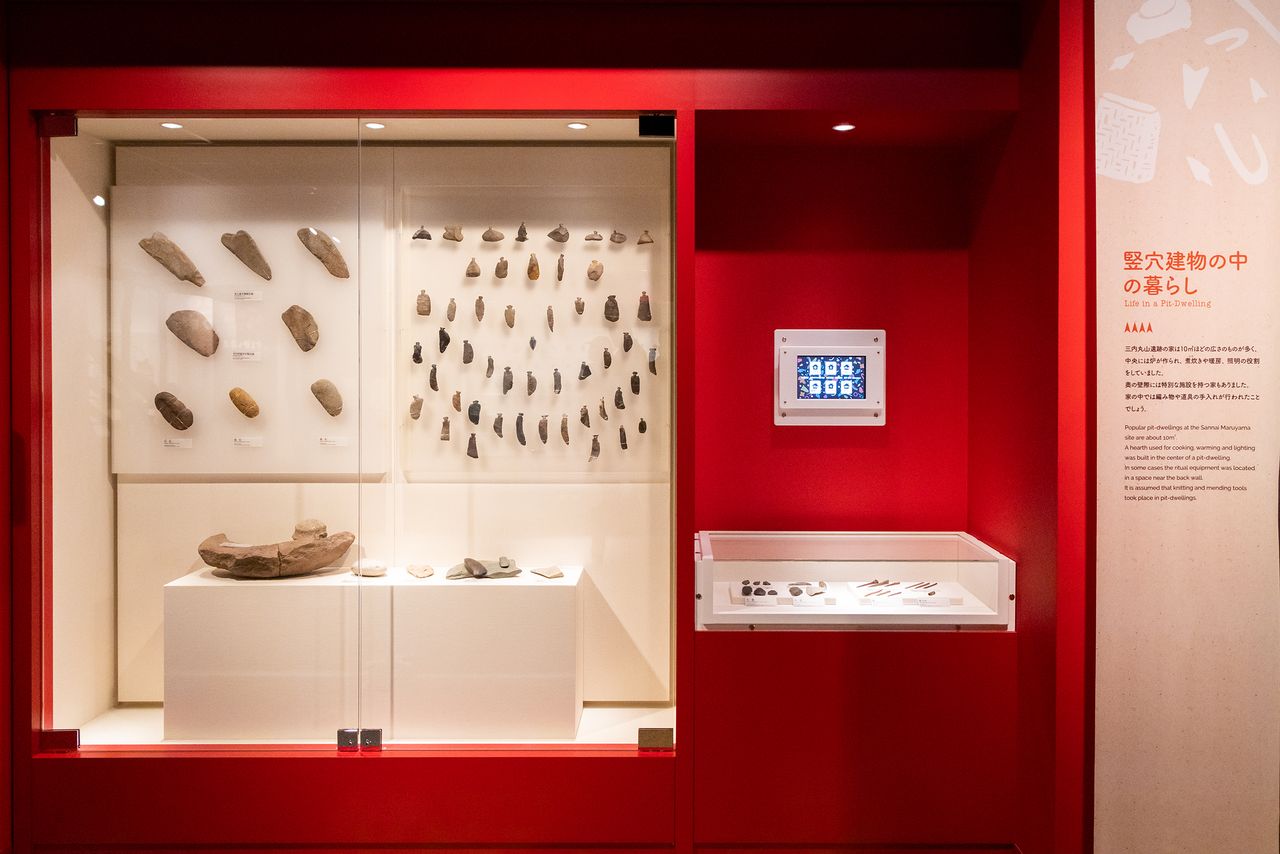 Knife blades, needles, and other stone tools on display. 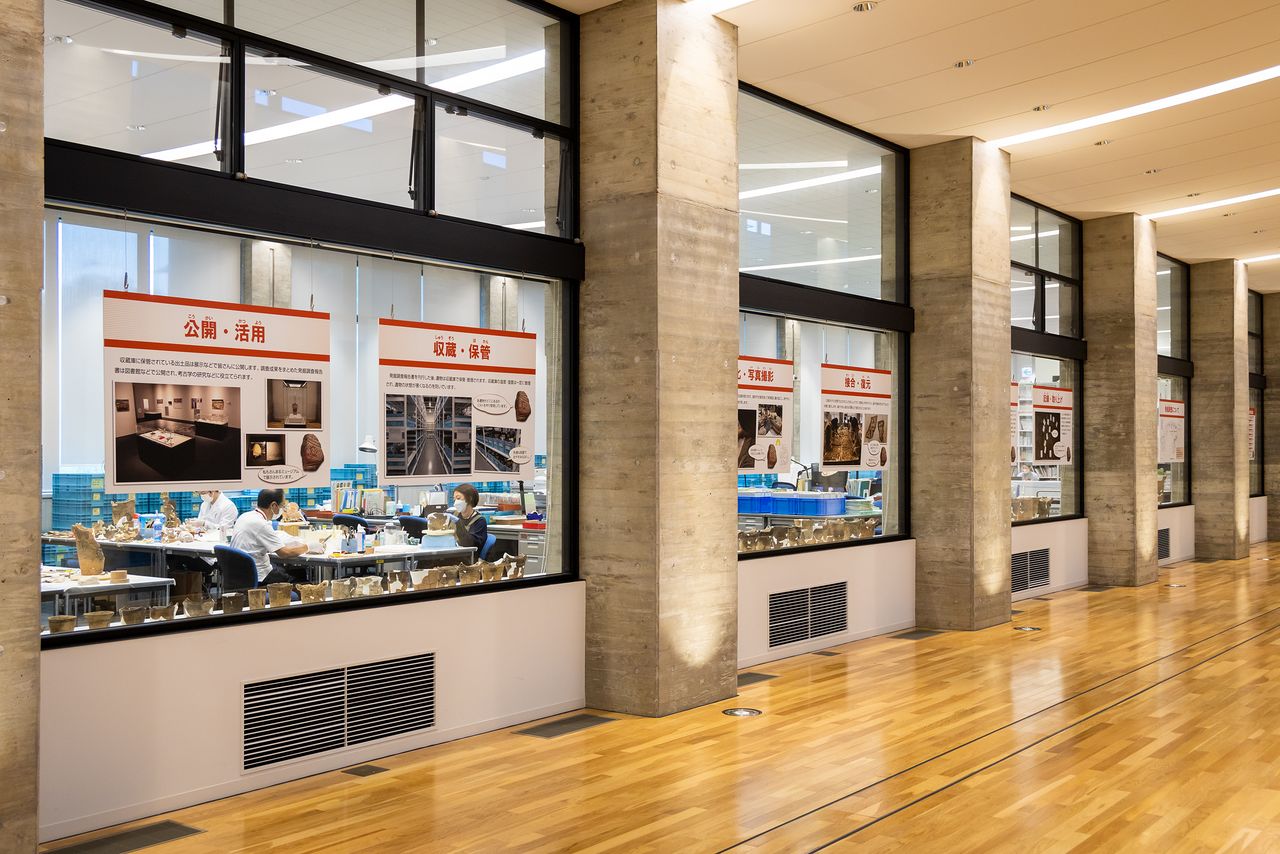 A cross section of a mound reveals a profusion of pottery shards.

Souvenirs are available at the museum’s store, which offers replicas of items on display, or visitors can try their hands at recreating artifacts like miniature clay figurines or curved beads at the facility’s studio. There is also a restaurant offering dishes featuring Jōmon foods like chestnuts, acorns, and ancient rice strains.

A tour of Sannai Maruyama can be combined with a trip to the stone circles at Komakino, also a UNESCO World Heritage site, about 20 minutes away by car, providing another fascinating aspect of life in the Jōmon period. 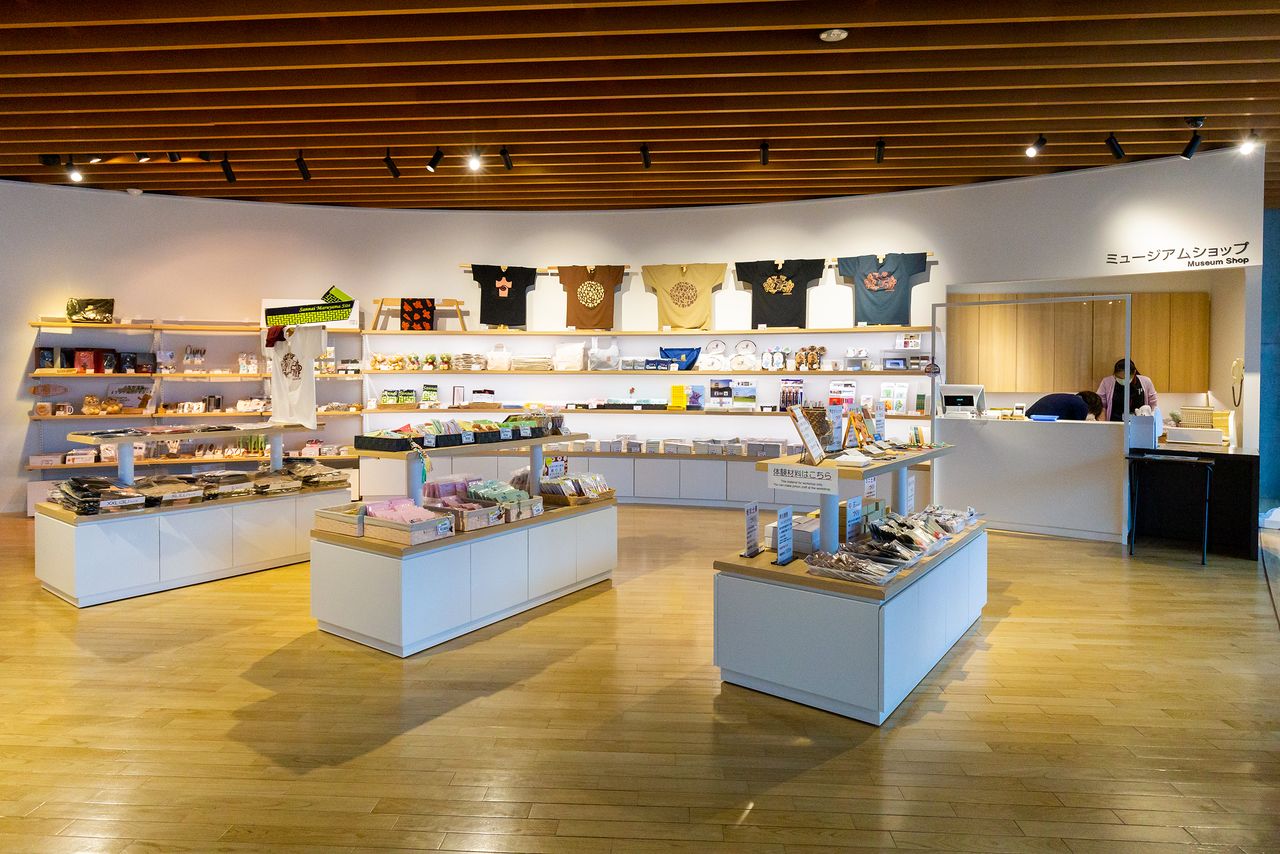 The museum shop offer replicas of artifacts along with Sannai Maruyama-branded items like T-shirts and stationery. 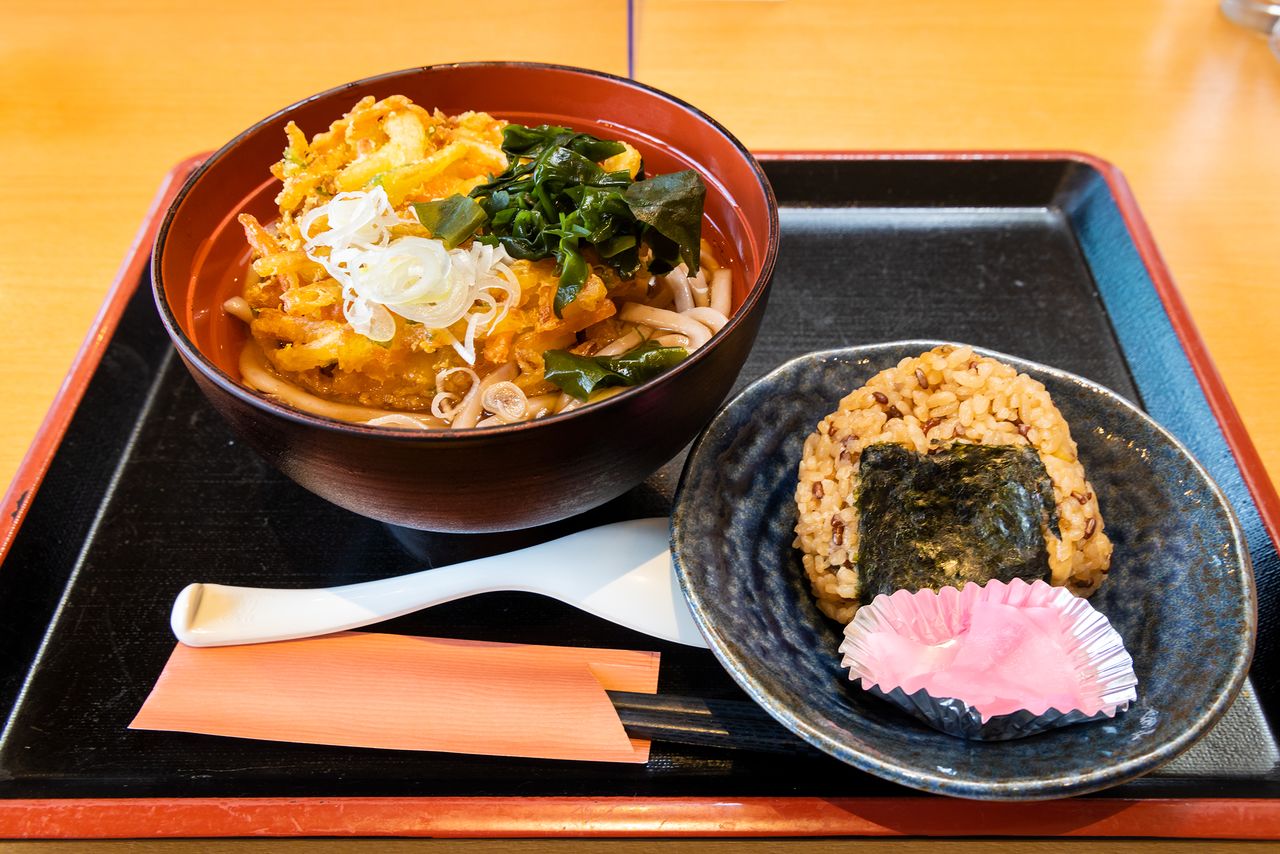 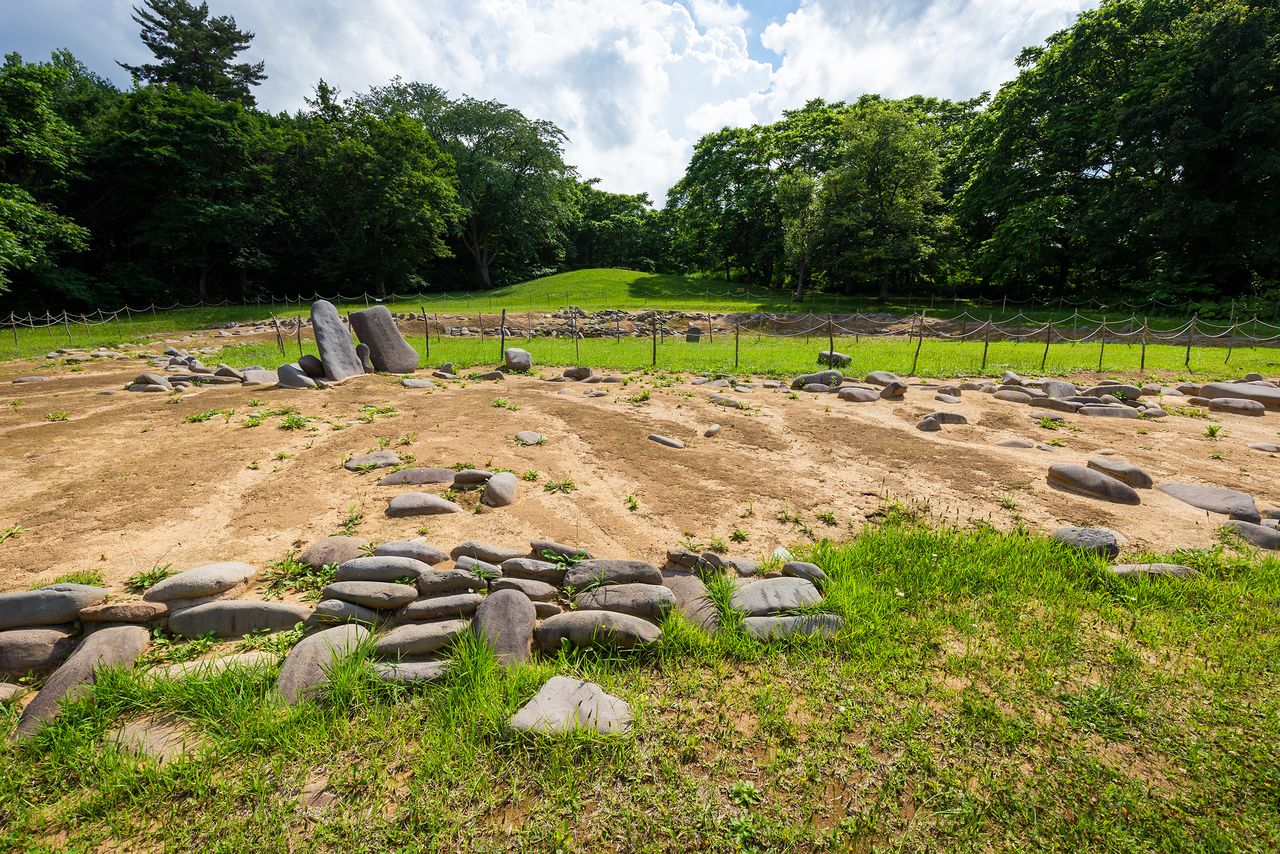 Stone circles at the nearby Komakino archeological site.