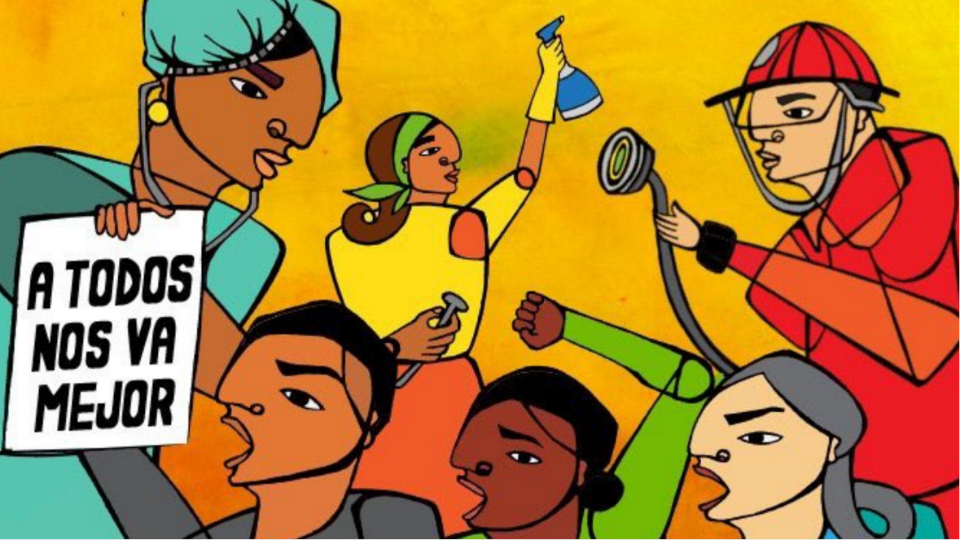 Art by Favianna Rodriqguez / via AFL-CIO

PHILADELPHIA (PAI)—After a discussion that ranged from practical workers’ rights to Biblical moral precepts, AFL-CIO convention delegates voted to “redouble” the federation’s campaign to win documented status for all migrants inside the U.S., along with those seeking asylum and entry.

“The moral fabric of every nation and every society is measured by how they treat the least among us,” Farm Labor Organizing Committee President Baldemar Velasquez told his colleagues, quoting Biblical prophets, on June 15.

The Old Testament, he paraphrased, says “We shall govern our aliens with the same laws we govern ourselves.”

But the discussion, and the resolution, turned to the practical, pointing out not just the benefits migrant workers, including those who are now undocumented, contribute to the economy, but how they also were in the front lines of those keeping it going, at hazard to themselves, during the coronavirus pandemic.

And those who were undocumented were forced to do so under employer exploitation and repression, backed by the threat of denunciation and eviction.

The resolution adds migration is part of a larger, worldwide problem: Corporate greed.

It demands “enforceable environmental and labor standards in trade deals and investment strategies, and an end to extractive, neocolonial foreign policy approaches that enrich multinational corporations and fuel poverty, exploitation, environmental degradation, violent suppression of rights, and other factors that drive working families from their homelands.”

In 1999, prodded by then Unite HERE President John Wilhelm, the labor federation reversed its historic skepticism about comprehensive immigration reform. Before that, unions had often catered to the popular attitude that migrants took jobs away from native-born people. Wilhelm reported not only was that untrue, but that migrants were an essential—and growing—part of the economy.

And as long as they were both unorganized and, because of their status, unorganizable, venal and vicious employers could not only exploit them via low wages, no benefits, and threats of deportation, but use the threat of importation of undocumented people to force current workers to take cuts in pay and benefits, too.

So the AFL-CIO changed course and has campaigned to win documented status for migrants, including the 11 million undocumented people already here, ever since. The resolution also points out the conditions haven’t changed very much for migrants in two decades or more. The coronavirus pandemic exposed the exploitation for all to see, it said.

“Real immigration reform is an essential part of the larger structural change we need to dismantle systemic racism, and create an economy that protects working people and promotes democracy in the workplace and the community,” its latest resolution declares.

“Our unions will never accept policies that relegate millions of workers to an exploitable subclass with severely constrained rights. That is why we remain steadfast in the fight to win a path to citizenship for every undocumented worker…, and why we reject the model of work visa programs that gives employers control over the status and fate of workers,” it explains.

“The AFL-CIO is committed to building a bold, dynamic, and inclusive labor movement that brings good jobs and a secure future to all workers, regardless of where we were born.

The document calls for redesigning the migration system “to meet the real needs of people, rather than the purported needs of employers.” That means, convention delegates said, not just securing a documented status for migrants but also H1-B, H2-B, and other visas that let employers exploit migrants by either threatening them with deportation or banning them from changing jobs.

“Unyielding solidarity and commitment to building worker power animates our demand for a more just immigration system that protects those in need, and ensures full and enforceable labor rights for all.”

But it’s not just worker rights for migrants, the resolution says. Reform must include “transformative changes that protect our rights to a ballot, a union, a good job, a livable planet, a just path to migrate and a truly inclusive society” that will “put people over profit.”

The resolution pledges the federation to redouble its efforts to win “a long-overdue path to citizenship” and “relentlessly defend all workers whose rights are under attack” including DACA workers and Temporary Protected Status migrants—many of whom are in the building trades and have resided in the U.S. for decades.

Passage coincided with the tenth anniversary of former Democratic President Barack Obama’s creation of DACA (Deferred Action for Childhood Arrivals). DACA let young people, brought to the U.S., undocumented, by their parents when they were too young to decide, come out of the shadows and get work permits, serve in the military, or attend college.

The Republican Trump regime, catering to both the Oval Office occupant’s personal hatred and his white supremacist backers, tried to dump DACA. Court rulings stopped him.

The resolution also pledges to “organize all workers, regardless of status, and pursue concrete protections and work permits for immigrants who seek to form or join a union, bargain a contract or otherwise take collective action to make our workplaces safe and fair.” And it advocates a higher refugee cap, appropriate treatment, education and safety for unaccompanied children and meaningful due process for asylum seekers.

Move For Hunger and CORT Team Up to Provide Over 800,000 Meals and Extend Partnership into Its Fifth Year | National

MEET Connects with Hundreds of International Companies Expanding into the U.S. at SelectUSA 2022

MEET Connects with Hundreds of International Companies Expanding into the U.S. at SelectUSA 2022