When we’re done, there’s nothing but day baseball. 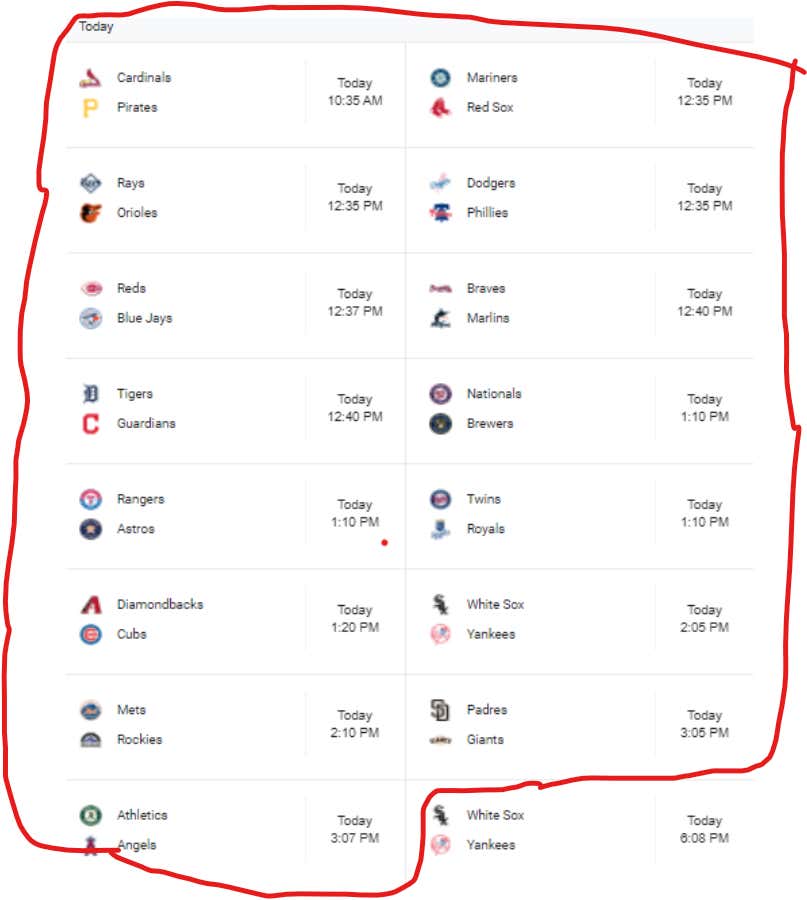 The west coast 3:05 PMs are going to hit perfectly on TVs 2 & 3 as I take in the PGA Championship final round while deeply rubbing CBD icy hot into the fibers of my hamstrings to combat the very natural pain that comes with actively & explosively engaging one’s lower half on a golf course. Sue me for being a sucker for sweet relief.

In the meantime I’ll be over here with the obligatory standings check with a reminder that we’ll have more detailed commentary on Mondays and Fridays. Otherwise it’s more touch and go. Some of you are just seeing this for the first time and you deserve to know the landscape. Others could use the refresher. In all cases there are few things more American than getting up in the morning and looking at the MLB standings. 2022. 1922. 1892. Go back however long you want and don’t hesitate to look ahead either. Checking the standings will always be something the human brain enjoys. 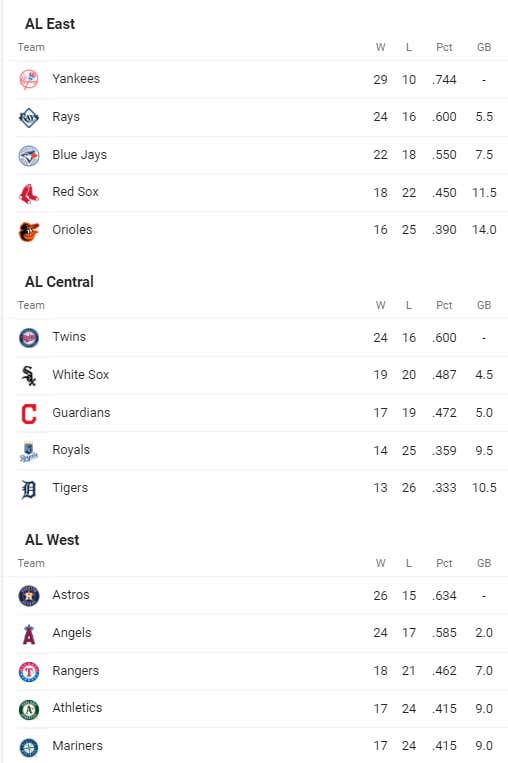 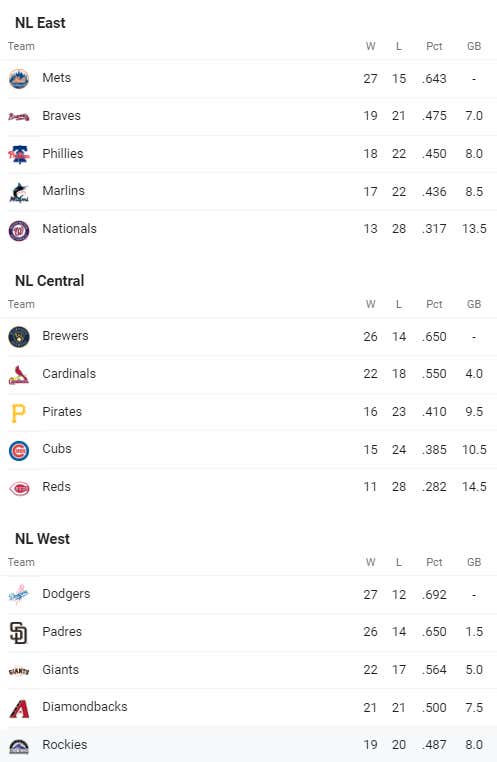 Not to get on a soapbox or anything

But the MLB is starting to feel a little like the NBA. I said a LITTLE. And what I mean is that you can predict the final 4 teams with pretty fair certainty. Yankees, Astros, Dodgers, Mets with room for White Sox and Brewers. Giants and Braves maybe. I know I just said 8 teams when making that point that you can accurately predict the final 4 so my fault if you’re confused. The bigger point is just the overwhelming gap between the top, the next group and then everybody else. If it’s August and the Mets have Sherzer + deGrom + Bassitt healthy along with whoever else Uncle Steve buys, then you can pretty much guarantee they steamroll the shit out of a 5 game series. Same thing if the Yankees stay healthy. Then imagine when McCullers comes back and if Garcia and Valdez keep getting better while the Dodgers regularly play at least 4 hall of famers.

Point is there’s this overwhelming gap across the league and it’s only getting bigger. I’m not ruling out a bunch of 2nd tier teams for making runs like the 2015 Royals. And I’m not trying to get into an argument about classifying that Royals team as 2nd class. That’s a bigger conversation. I just want to go on record now and say the MLB is closer to the NBA in parity than every before and that’s with the NBA actively building a more balanced league.

And here I am saying that I’ll save my shit for Monday morning. Get a feel for yourself one time Carl. You knew you couldn’t resist.

Sometimes I talk to myself. Part of the creative process or something like that. Anyways we got some baseball so let’s all talk to each other about it.

And again. I don’t care who needs to hear it. Enough with parents in stands unless we’ve got a compelling story. Sick mom. Down on luck father. Shitty circumstances – by all means go right ahead. But if we’re just gonna give the red carpet treatment to every mom and dad in bad blue jeans then we’re going to lose all significance. And that’s coming from a guy who has once or twice interviewed players parents and friends. I have no problem being a hypocrite. Enough is enough.

Mom & Dad about to have that real good sex. Hormones and endorphins gotta be flying off the charts.

Benches Clear In The Bronx

I know there’s some serious undertones here like Tim Anderson and the White Sox accusing Josh Donaldson of racism. Very serious stuff indeed and really no excuse regardless of what Tim has said about himself in the past. Not really the point of the blog. I just have to acknowledge that the hefty accusations against Donaldson before further suggesting that this kind of home run certainly doesn’t help cool tempers on a hot summer day in the Bronx either. I mean it.

Josh Donaldson should give his side tomorrow and then we can judge him strongly after. If what I know to be true, he’ll sound like a moron and will only look worse. Chances are he gets drilled 5-6 times in a row and even that might be under selling it. I can see the entire White Sox organization lining up to drill Donaldson. That’s how beloved TA is around the club. There’s at least two dozen minor league pitchers that would gladly trade mercenary-related shame for the glory of an MLB debut. In some ways I can see Rob Manfred forcing the White Sox to forfeit for public safety concerns. And again I might be underselling the White Sox reaction. Good for them.

Also, benches clearing is really just a whole bunch of weak sauce. We need to get a committee working on a solution pronto.

We talked a lot about Hunter Greene on S9 this week because he threw the no-hitter and is remarkably filthy. So take this bomb with a grain of salt. He still pitched well in Toronto despite getting shit rocked here. 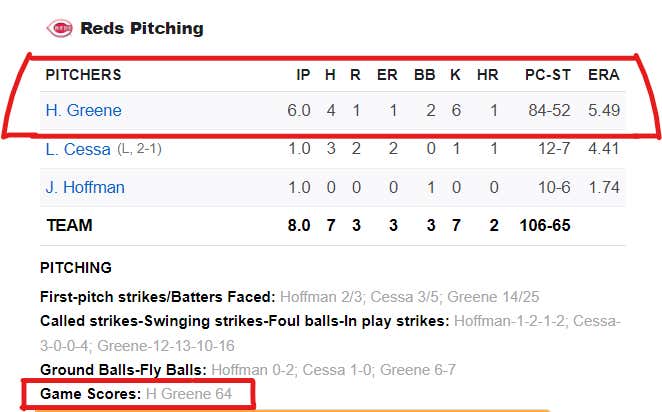 The Red Sox Are En Fuego

I take credit for talking shit about them this week on the show then watching them explode in my face. That’s on me and you’re very welcome.

The Cubs Keep Losing. Don’t Ask Me About It Please.

Borderline alarming just how easy this club loses games. That’s 4 in a row after a brief glimmer of hope which is actually right on brand for your average Cubs team. This one’s not very good, making it completely average relatively speaking. See if that makes sense. In the meantime I’ll be over here admiring Kyle Schwarber.

10 on the young season en route to maybe 50? The slash line isn’t very impressive but he’s Kyle Schwarber. You’re not paying for the fantasy numbers – you’re paying to put the fear of God in the other team’s pitcher. On that front, Kyle Schwarber will always be successful much as Tom Ricketts & Co. will always be pathetic for not having the $8M needed to keep him a Cub. But I digress. Let’s stay positive.

Oh what the fuck…

Congratulations on the eternal promise. Uncle Frank has a deluxe nacho helmet in right center with your name on it.

Inside The Park Home Run Alert

Goddamn shame this guy has to play in Pittsburgh, much as it’s a shame you guys don’t know about CJ Cron being the biggest dark horse MVP Candidate of all time

+7500 According to Rico Bosco’s Research

Hell of a start here from the big fella:

He’s on pace for 68 extra base hits, 113 runs, 220 total hits along the one stat I refuse to kill no matter what the nerds say. You will not devalue RBIs from my childhood brain just as you can’t convince me CJ Cron’s pace for 140 is anything less than spectacular. +7500 to win MVP in a year that’s already riddled with injuries from the top of the NL. That’s what we call value.

Every Tuesday and Thursday morning, new Starting 9 baseball shows out with me and Jake Arrieta and a growing list of guests. I’ll continue to write baseball round up blogs if you guys throw me a bone and subscribe to the show. I think that’s a fair trade off.

Everything is on that link. Spotify, Apple, YouTube, etc. Use it to follow the show support the Sports in Barstool Sports.