Bill O’Reilly’s Killing the Killers Debuts at #1. This new book is the 11th in the “Killing” series and it’s the 11th to be a #1 New York Times bestseller. Sales in this series are 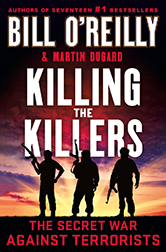 roughly 19 million copies worldwide and have spent close to 340 weeks on the New York Times bestseller list. In the new book, Killing the Killers – The Secret War Against Terrorists (2022 St. Martin’s Press) Bill O’Reilly and Martin Dugard report on America’s intense global war and manhunt against terrorist extremists who both masterminded the horrific 9/11 attacks as well as executed hundreds of others on American and international soil. They trace America’s efforts to defeat Al Qaeda and ISIS worldwide. O’Reilly and Dugard gained access to top secret national security documents as well as interviewed the highest national security officials in the U.S. The publisher says that primed with deeply sourced information, detailed maps and revealing photographs, O’Reilly and Dugard have created a riveting account that has never been reported to this scope and depth. Bill O’Reilly’s radio programs – including the new, national daily one-hour “No Spin News,” show – are syndicated by Key Networks.

download and DVD purchase on SalemNOW.com – and has become a huge hit on Rumble and its Locals platform. D’Souza says, “The movie is a success financially for sure, but also it is successful in its political and cultural influence. It’s the most-talked-about movie out there right now, making headlines in multiple publications, and is trending extremely high on social media.” The film purports to provide proof of illegal ballot harvesting, both in geo-targeting of cell phone data, and in actual video surveillance of the many unmanned ballot boxes in the five key battleground states. The movie’s conclusion of illegal ballot harvesting is based on research by True The Vote. It features five Salem radio talk show hosts as they walk through the process of learning what the evidence shows, and then discussing what this means for the American belief in free and fair elections. Salem says those hosts, Dennis Prager, Sebastian Gorka, Charlie Kirk, Eric Metaxas and Larry Elder, all came away disturbed at what they learned really happened to hand the election victory to Joe Biden.

FANTASTIC SPEAKER LINEUP AND AGENDA for TALKERS 2022. TALKERS is presenting the 25th annual installment of the talk media industry’s longest-running, largest and most important convention, TALKERS 2022, on Friday, June 10, 2022 on the campus of Hofstra University in Hempstead, New York in association with the prestigious university’s multi-award-winning station WRHU Radio.

TALKERS publisher Michael Harrison says, “We are delighted to be able to join forces again with our colleagues at Hofstra – the site of our very successful 2021 and 2016 events – and enjoy the remarkable resources that its Lawrence Herbert School of Communication brings to the table.”

As was the case last year, this event will be held in a COVID-19 compliant environment based upon the circumstances at the time of the convention. As is its tradition, TALKERS 2022 will boldly address key issues – some existential – facing the talk radio and talk media industries at this dramatically critical juncture of rapidly accelerating technological and societal change as well as identifying the remarkable opportunities inherent in these developments. It will also provide participants with unique and powerful networking opportunities. Attendance at the conference is limited to members of the working media and directly associated industries as well as students enrolled in accredited learning institutions. All attendees will be required to register in advance on the phone with credit cards. Attendance will be limited, and the conference is again expected to be an early sellout. Full details about the agenda (more than 50 in-person, luminary speakers) sponsorship opportunities and hotel information will continue to be posted in TALKERS in the days ahead. The all-inclusive registration fee covering convention events, exhibits, food, and services for the day is $349. Because space will be limited and a sellout is anticipated, all registrations are non-refundable.

To register or to obtain sponsorship information, call Barbara Kurland at 413-565-5413.

Travel and Hotel Information for TALKERS 2022. The full-service Long Island Marriott Uniondale is serving as the closest and best hotel for TALKERS 2022. To reserve rooms, please click here. All New York area airports are a car ride away from the hotel and Hofstra: JFK (18 miles), LaGuardia (24 miles), MacArthur (34 miles), Newark (47 miles). Free and convenient parking information at Hofstra will be posted here shortly.

broadcast and digital brands encompassing more than 10 music, talk, and news formats. iHeartMedia operates the Spanish news outlets WHNZ-AM/W290BJ, Tampa “Acción 1250 & 105.9” and WFXJ-AM/W247CF, Jacksonville “Acción 97.3.” Lopez says, “I am very grateful for this new role in my career. I’ve been with iHeartMedia for more than six years and I think it’s great to have this distinguished opportunity where I contribute with my experience and skills to the expansion and growth of the brand. With the continuing growth of the Hispanic population in Florida it is very important that we serve our community with an authentic voice and a compelling product.”

Abortion Rights Top News/Talk Story for Week of May 9-13. The fallout from the leak of the Supreme Court’s draft decision to overturn Roe v Wade, including the protests at justices’ residences, was the most-talked-about story on news/talk radio this week, landing atop the Talkers TenTM. At #2 this week was the Russia-Ukraine war tied with the larger topic of U.S. foreign policy, followed by the economy, including inflation, supply chain woes, the financial markets and recession fears at #3. The Talkers TenTM is a weekly chart of the top stories and people discussed on news/talk radio during the week and is the result of ongoing research from TALKERS magazine. It is published every Friday at Talkers.com. See this week’s complete chart here.

FOX News Media Seeks Freelance Radio Anchor. This is a New York or Washington, DC-based position. FOX News is looking for a freelance radio anchor to join the FOX News Audio family as on-air talent for FOX News Radio Network/FOX News Headlines 24/7 Sirius XM Channel 115. As the freelance radio anchor, you will work under tight deadlines and deliver top-notch newscasts. You have a passion for breaking news and the flexibility to work on a day’s notice. Find out more and apply here.

FOX News Media Has Opportunity for Freelance Producer/Editor. This New York-based position is a freelance producer/news editor role in which you will supervise the staff for network radio news operations (terrestrial and FOX News Headlines 24/7 – Channel 115 on SiriusXM Radio). As the freelance producer/news editor you are our editorial leader, working with news anchors to craft the content and structure of a 24/7 news operation. This is fast-moving news environment! Your ability to thrive in a fast-paced, deadline-driven newsroom allows you to deliver top-quality segments/newscasts. You excel at multi-tasking and pay close attention to details. Your writing and editing skills are excellent and your editorial judgment is first-rate. Find out more and apply here.

Podcast Producer Position Open at FOX News Media. FOX News Audio is looking for a producer for The Will Cain Podcast to be part of the fast-paced and growing FOX News Podcast Network. The producer for The Will Cain Podcast will develop ideas, pitch stories, and work with FOX News Channel talent in crafting daily and weekly podcasts. The producer will also direct bookings, edit shows, and work with production teams to create high-quality content every day. In addition to their production duties, they will also lead creative on social media posts and website write-ups to promote the product. This is a New York, Washington, or Nashville-based position. Find out more and apply here.