Germany reported more than 80,000 new coronavirus infections, the highest recorded in a single day since the pandemic began, as the contagious Omicron variant rips through a population with lower vaccination rates than other parts of Europes.

The European Medicines Agency says the spread of the Omicron coronavirus variant across the continent is pushing COVID-19 towards being an endemic disease that humanity can live with.

Here are the latest updates:

French Health Minister Olivier Veran said it was too early to say if the current, Omicron-fuelled wave of the new coronavirus had peaked in the country, which is currently reporting record numbers of daily new cases.

“We still need a bit of time to work out whether or not we are near a current COVID peak, ” Veran told France info radio, adding that the more dangerous Delta variant was declining in France.

French health authorities on Tuesday reported 368,149 new coronavirus cases, the highest single-day tally of the pandemic. And the seven-day moving average of new cases, which smoothes out reporting irregularities, rose to a record level of 283,394.

New cases, on the rise since the beginning of the year, surpassed a previous peak set in late October, when the European Union’s least vaccinated member state grappled with the Delta variant.

The virus has killed 89 people in the past 24 hours in the Balkan country, according to official figures, bringing the total death toll to 31,761.

More than 5,200 people were in hospitals, including 580 in intensive care. In the capital, Sofia, planned operations have been suspended as hospitals prepared to expand wards for COVID-19 patients.

Health authorities have said a surge in hospitalisations may mean new restrictions. 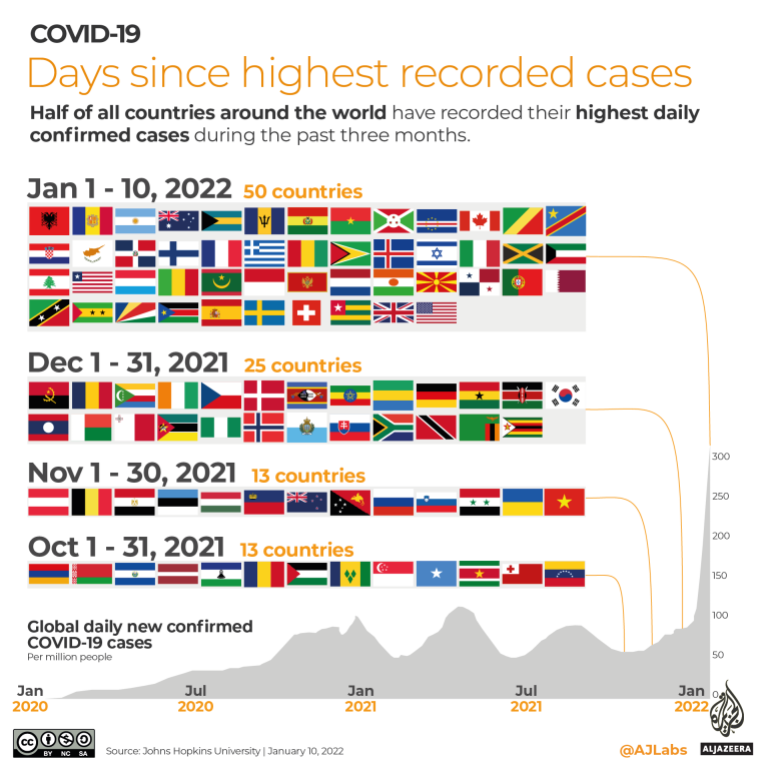 Germany reported 80,430 new coronavirus infections, the highest recorded in a single day since the pandemic began, as the contagious Omicron variant rips through a population with lower vaccination rates than some other parts of Europe.

The seven-day incidence rate, a key yardstick in deciding coronavirus policy, has ticked up steadily since the start of the year, to stand at 407.5 cases per 100,000 people on Wednesday, versus 387.9 the day before.

Japan’s western prefecture of Osaka expects to record about 1,700 new coronavirus cases, roughly tripling from a day earlier in their first rise beyond 1,000 since mid-September, public broadcaster NHK said.

The prefecture had 613 cases on Tuesday, NHK added.

The Philippine government issued an order on Wednesday that would ban unvaccinated residents of Metro Manila from public transportation, amid a new surge of COVID-19 cases.

The order was signed by President Rodrigo Duterte’s transport secretary, Arthur Tugade, on Tuesday, and was released to the public on Wednesday.

The order applies to all domestic travel to, from and within Metro Manila via all forms of public transportation.

The International Federation of Red Cross and Red Crescent Societies (IFRC) said from India to Nepal and Bangladesh, hospitals are reporting “alarming increases” in infections, including a 2,013 percent increase in India in the past month.

“This latest surge of COVID-19 spells immense danger for millions of people and health systems across South Asia. Omicron is spreading fast and while vaccination rates have been soaring, after such tragic loss of life last year, fear is mounting of record infection rates,” Udaya Regmi, head of IFRC in South Asia, said in a statement sent to Al Jazeera.

Tennis star Novak Djokovic has admitted that an incorrect answer was made on his Australian entry documents, breaching the country’s strict laws on reporting recent travel.

Djokovic said his travel declaration was filled in by his support team, who made an “administrative mistake” when they ticked the “no” box in response to whether he had travelled elsewhere in the 14 days before arriving in Australia.

Giving false or misleading information in the form is an offence, carrying a maximum penalty of 12 months in prison, and a fine of up to A$6,600 ($4,730) and can lead to cancellation of the offender’s visa.

Hong Kong’s Carrie Lam said that the city could soon feel the negative effects of tougher quarantine curbs on air crew, with the expected decline of cargo traffic and flow of supply of goods.

In a speech before the “patriots-only” Legislative Council, Lam said Hong Kong already had the strictest measures against imported COVID-19 infections and it was difficult to tighten them further.

Reuters news agency is reporting that more than 30 officials from major South Korean companies who attended the giant CES tech trade show in Las Vegas last week tested positive for COVID-19 while in the US.

About 20 officials from Samsung Electronics and about six at SK Group, parent of energy firm SK Innovation and chipmaker SK Hynix, were among those who tested positive for the virus after attending CES, the sources said.

Hyundai Heavy Industries also said six of its employees who attended tested positive and were quarantined, and some have been released since.

South Korea’s daily infections back to above 4,000

South Korea’s health authority said that its COVID-19 cases bounced back to above 4,000 for the first time in six days, possibly due to the the Omicron variant.

At least 4,388 new cases were reported, including 4,007 local infections, raising the total caseload to 674,868, according to the Korea Disease Control and Prevention Agency.

According to Yonhap news agency, the government will assess later on Wednesday the risk level of the pandemic and decide on possible revisions to the current social distancing rules.

At least 14 million residents of the city of Tianjin in China have started a new round of COVID-19 testing to block the spread of Omicron.

Tianjin reported 33 domestically transmitted coronavirus infections with confirmed symptoms for Tuesday, up from 10 a day earlier, according to the country’s coronavirus monitor.

The city ordered a half-day off for employees at companies and other institutions on Wednesday and required them to remain at home to comply with the city’s second round of mass testing, Reuters news agency reported.

Meanwhile, China’s city of Shenzhen also reported four new cases of the virus. As of Monday, the city had completed more than 22 million tests in four days as the city also tries to contain the spread of COVID.

In Germany, the country’s trade association has warned of significant supply chain disruptions due to the rapid spread of the highly infectious Omicron variant of the coronavirus, but said a long-term collapse of the supply chains was unlikely.

“There is no risk of collapse, but of a massive disruption of the supply chain – at least temporarily,” BGA trade association president Dirk Jandura was quoted on Wednesday by Funke newspaper group as saying.

German industry has been hit by supply shortages of microchips and other components, while rising COVID-19 cases are clouding the outlook for retailers at the start of 2022.

Indonesian President Joko Widodo announced on Wednesday that the country will be rolling out its COVID booster shots for free, according to the Jakarta Post.

The government had initially planned to ask the majority of Indonesia’s 270 million inhabitants to pay for the boosters out of their own pockets.

There have been concerns that the rollout could exacerbate vaccine inequity across the country. Only about 117 million Indonesians have been fully vaccinated out of a population of more than 270 million since the campaign began on January 13 last year.

Read all the updates from January 11 here.