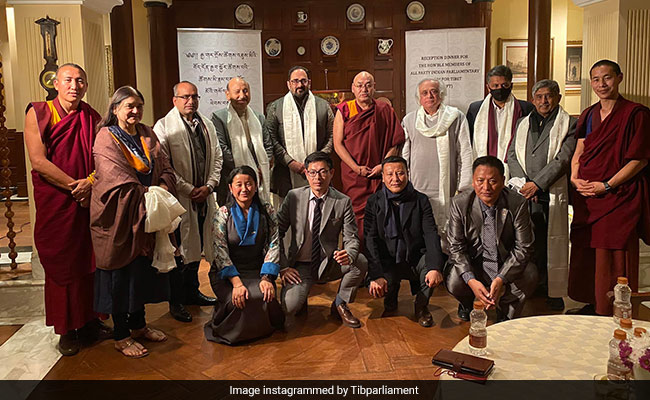 The forum of MPs plans to visit Dharamshala in Himachal Pradesh to meet the Dalai Lama.

Several Indian lawmakers have slammed the Chinese embassy for asking them to refrain from “providing support to Tibetan forces” after they attended and even hosted by the Tibetan Parliament in Exile. While Congress leader Manish Tewari called it an “imbecile missive”, Biju Janata Dal MP Sujeet Kumar said the Chinese embassy had no locus standi to write to Indian MPs. There has not been any immediate reaction from the government on the issue.

China has often been accused of overlooking protocols and conventions to bully other nations by this new brand of increasingly assertive Chinese diplomacy under President Xi Jinping, also called “wolf warrior diplomacy”, to further its national interests.

At least six MPs from across political parties, members of the All-Party Indian Parliamentary Forum for Tibet, had attended a reception which they say was aimed at promoting cultural and trade ties with Tibet. The Chinese embassy in India had written letters to several of the MPs who attended the event and expressed concern over their attendance and asked them to refrain from providing support to “Tibetan forces”, news agency PTI said.

Mr Kumar and Mr Tewari have both not personally received the letter but expressed contempt for the act by the Chinese which they say breaks protocol.

“My attention has been drawn to a report published in some English newspaper. Neither have I received any letter nor will I demean or diminish myself by responding to such imbecile missives. Had (Chinese Foreign Minister) Wang Yi written, perhaps I would have considered responding,” Mr Tewari told PTI.

Mr Kumar, who is also the convenor of the forum, said he personally treated the letter with “the contempt it deserves” and pointed out that if China had any issue, it could have written to the Ministry of External Affairs. “It has violated the protocol,” he added.

The forum plans to visit Dharamshala in Himachal Pradesh to meet the Dalai Lama to discuss the “cultural genocide” in Tibet.

Beijing has in the past accused the Dalai Lama of indulging in “separatist” activities and trying to split Tibet and considers him as a divisive figure. The Tibetan leader has, however, has said in the past that it is no longer a struggle for political independence and the focus should be on preservation of Tibetan culture, religion, and identity. He prefers Tibet remaining with China, with “some kind of reunion”, he had told news magazine “The Week” in a 2019 interview.

The 14th Dalai Lama left Tibet in 1959 to escape Chinese occupation and has been keeping China on tenterhooks about his successor.

Relationships between India and China have been progressively worsening over border disputes in Ladakh and Arunachal Pradesh, which it considers a part of Chinese territory in “South Tibet”. Recently, Beijing announced Chinese names for 15 places in Arunachal Pradesh drawing strong criticism from India which asserted that Arunachal Pradesh has always been an integral part of India and “assigning invented names to places does not alter this fact.”

The noteworthy Utahns who died in 2021

The noteworthy Utahns who died in 2021