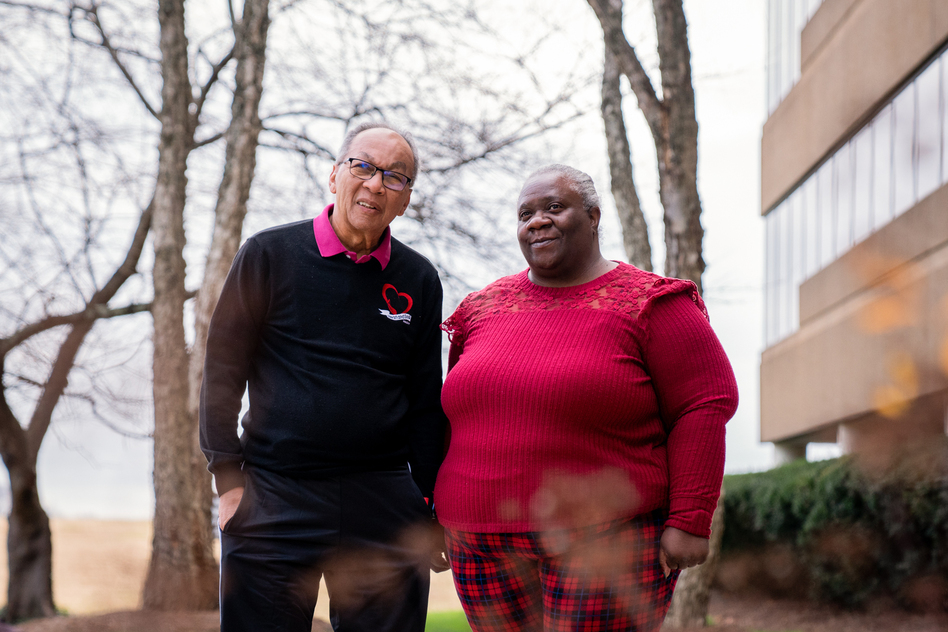 André Lee (left), administrator and cofounder of Heart and Soul Hospice, stands with Keisha Mason, director of nursing, in front of their office building in Nashville, Tenn., on Dec. 20, 2021. Image: Erica Calhoun for NPR

This time, it didn’t take much convincing for Mary Murphy to embrace home hospice. When her mother was dying from Alzheimer’s disease in 2020, she’d been reluctant until she saw what a help it was. And so when her husband, Willie, neared the end of his life she embraced hospice again.

The Murphys’ house in a leafy Nashville neighborhood is their happy place — full of their treasures.

“He’s good to me — buys me anything I want,” she says, as she pulls a milky glass vase out of a floor-to-ceiling cabinet with mirrored shelves.

Willie bought Mary the display case to help her to show off all the trinkets she picks up at estate sales.

Down the hall, Willie lies in their bed, now unable to speak. His heart is giving out.

“You gonna wake up for a minute?” she asks as she cradles his head. She pats his back while he clears his throat. “Cough it out.”

Mary has been the primary caregiver for her husband, but she gets help from a new hospice agency in Nashville focused on increasing use of comfort care at the end of life by Black families. Heart and Soul Hospice is owned and operated by people who share the same cultural background as the patients they’re trying to serve.

In their application to obtain a Certificate of Need in Tennessee, the hospice owners make clear that they are Black and they intend to serve everyone but focus on African Americans who are currently underserved. Tennessee data show that in Nashville, just 19% of the hospice patients are Black though they make up 27% of the population. 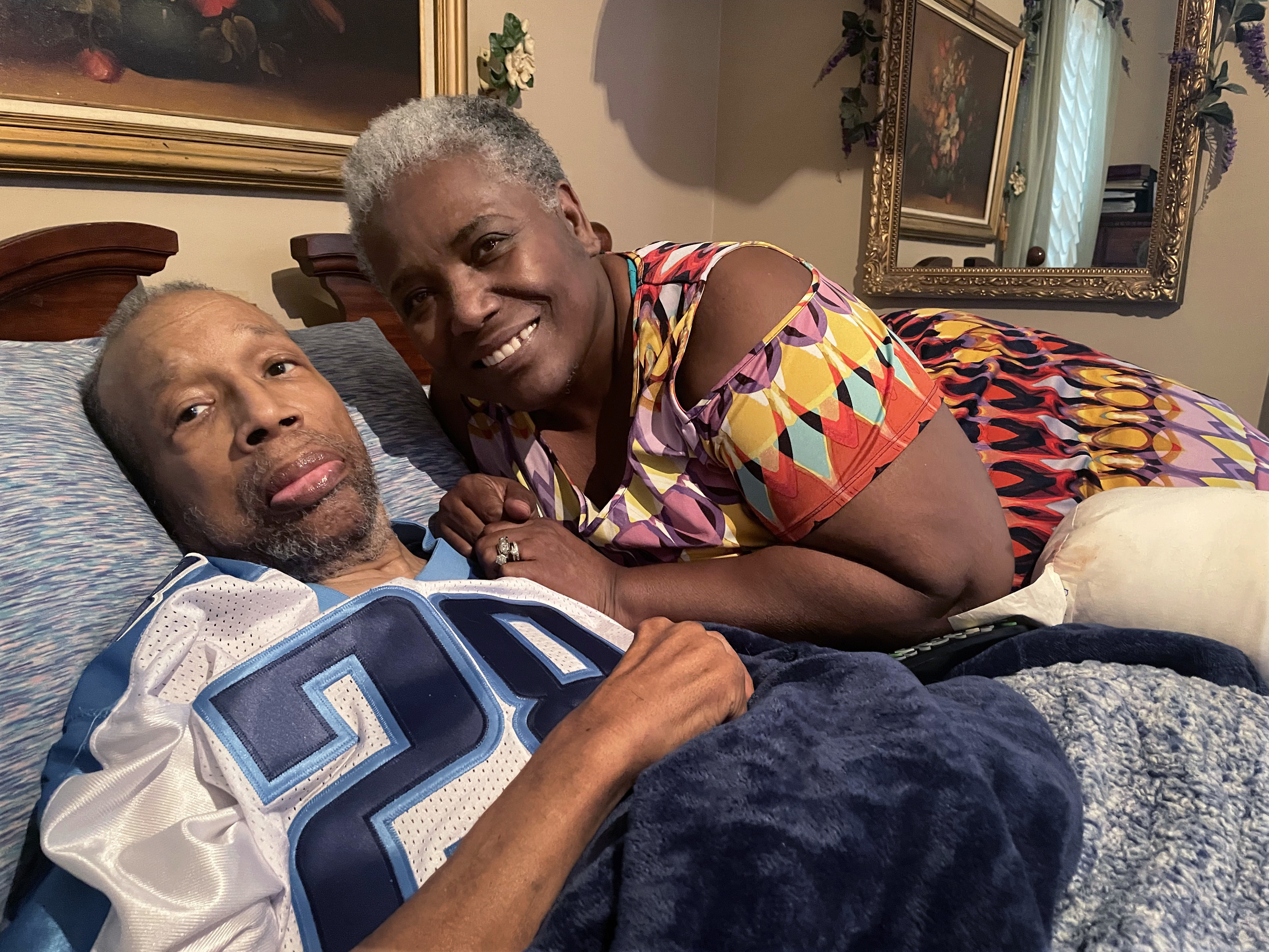 Hospice care helped Mary and Willie with a few baths a week, medication in the mail, and any medical equipment they needed. And there was the emotional support from a caring nurse. Image: Blake Farmer/WPLN

Though the area already had numerous hospice agencies, regulators granted the permission, based primarily on the value of educating an underserved group.

In Mary Murphy’s first experience with hospice, her mother had suffered from dementia for decades, yet still when transitioning to hospice came up with her mother, Murphy had many more concerns. She felt like she was giving up on her mom.

“My first thought was death,” she says.

National data shows Black Medicare patients and their families are not making the move to comfort care as often as white patients. Roughly 41% of Black Medicare beneficiaries who died in 2019 were enrolled in hospice, compared to white patients for whom the figure is 54%, according to data compiled annually by the National Hospice and Palliative Care Organization.

Murphy’s mother survived nearly three years on hospice. The benefit is meant for those in the last six months of life, but predicting when the end will come is difficult, especially with dementia. Hospice provides palliative care for the dying and support for caregivers for a long as the process lasts. 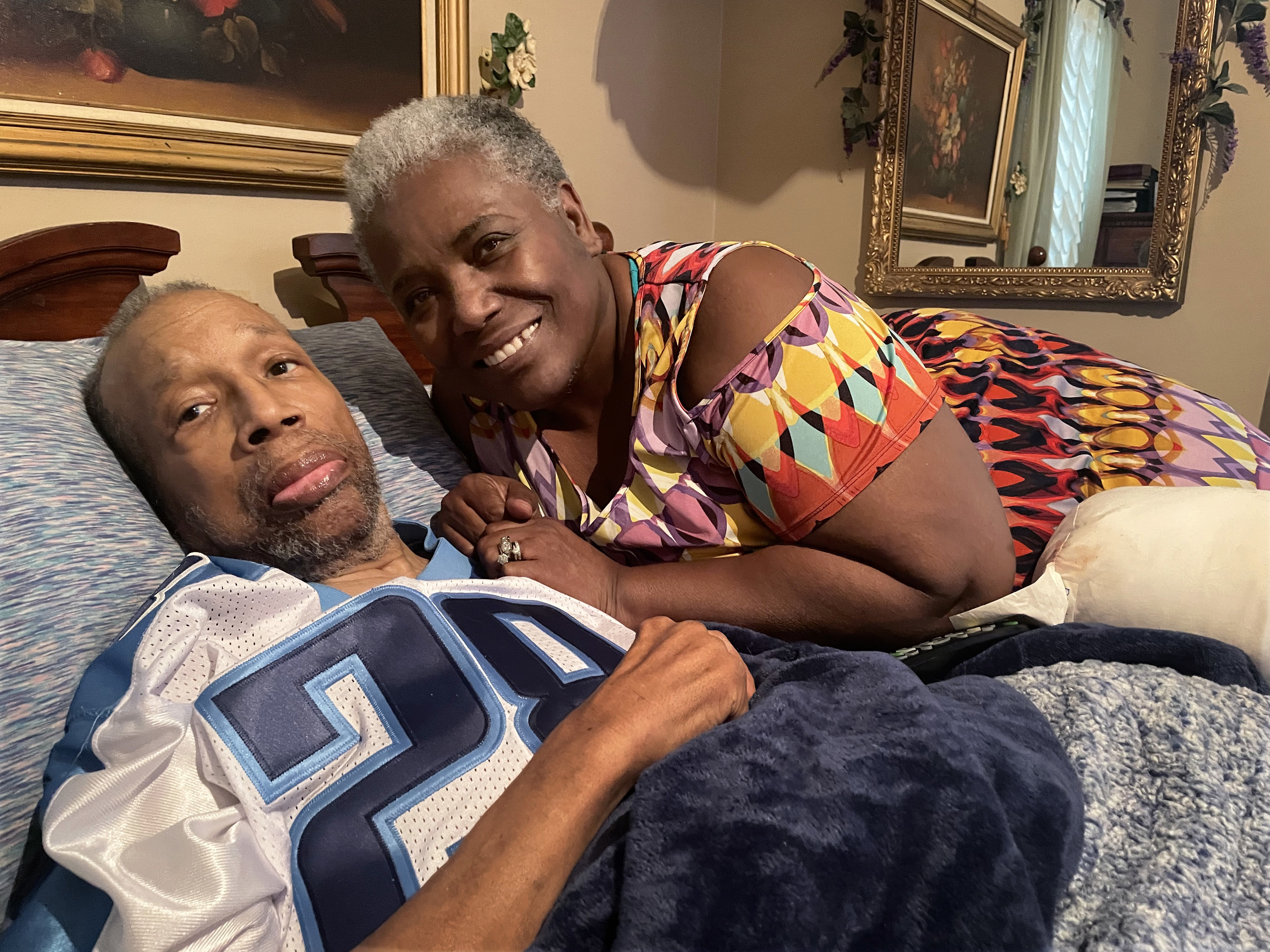 Murphy did most of the caregiving — which can be overwhelming — but hospice helped with a few baths a week, medication in the mail, and any medical equipment they needed.

And most important to Murphy was the emotional support, which came mostly from her hospice nurse.

“Wasn’t no doctor going to come here, hold my hand, stay here until the funeral home came for her,” she says about the day her mother died.

This year, on the day after Thanksgiving, Willie Murphy died. And the same hospice nurse was at the Murphy home within minutes. She’d already stopped by that morning to check on him and returned as soon as Mary called and told her he wasn’t breathing.

“If you don’t feel like, ‘Oh my God, thank God I have hospice’, if you can’t say that, then we’re doing something wrong,” says Keisha Mason, who is Heart and Soul’s director of nursing.

Mason is Black, like Murphy, and says in her view, there’s nothing fundamental keeping Black patients from using hospice except learning what the service can offer and that it’s basically free to patients — paid for by Medicare, Medicaid and most private health plans. 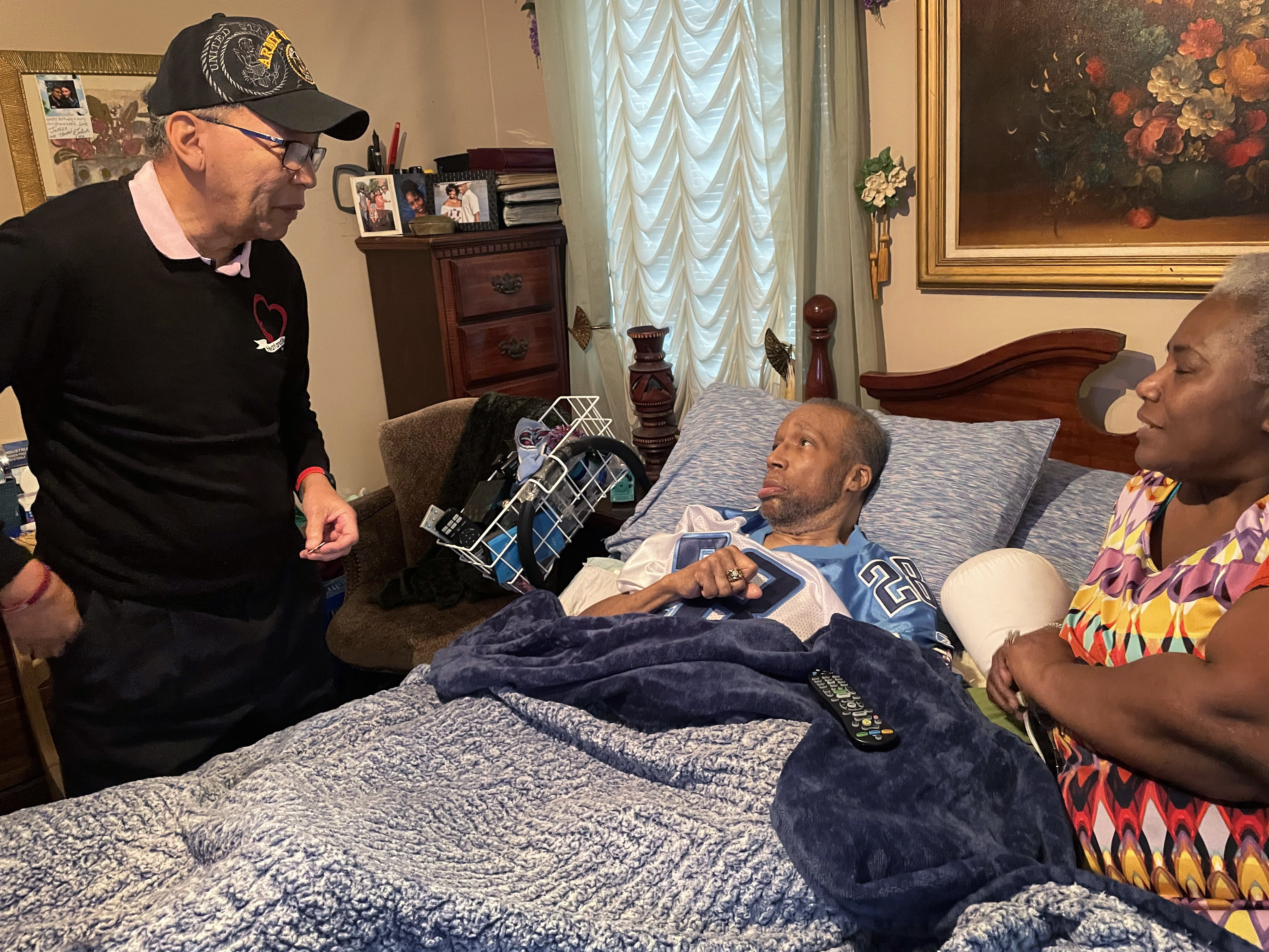 As Mason has helped launch this new hospice agency, she’s begun using new language, calling hospice more than a Medicare benefit. She describes it as an entitlement.

The investors in Heart and Soul include David Turner, owner of CNS Hospice in Detroit, Mich., Nashville pastor Rev. Sandy McClain and André Lee, who is a former hospital administrator on the campus of Nashville’s Meharry Medical College, a historically Black institution.

Lee and Turner also started a Black-focused hospice agency in Michigan, with plans to replicate the model in other states.

Lee says more families need to consider home hospice as an alternative for end-of-life care. Nursing homes are pricey. And even with Medicare, a hospital bill could be hefty.

“You’ll go in there and they’ll eat you alive,” he says. “I hate to say [something] bad about hospitals, but it’s true.”

Hospice research hasn’t come up with clear reasons why there’s a gap between white and Black families’ use of the benefit. Some speculate it’s related to spiritual beliefs and widespread mistrust in the medical system due to decades of discrimination.

The hospice industry’s national trade group, the NHCPO, released a diversity and inclusion toolkit and a guide for how to reach more Black patients this year. It recommends connecting with influential DJs and partnering with Black pastors. But also just hiring more Black nurses.

“A lot of hospices don’t employ enough Black people,” he says. “We all feel comfortable when you see someone over there that looks like you.”

Well established hospice agencies have been attempting to minimize any barriers with their own diversity initiatives. Michelle Drayton of Visiting Nurse Service of New York says her large agency has been meeting with ministers who counsel families dealing with failing health. 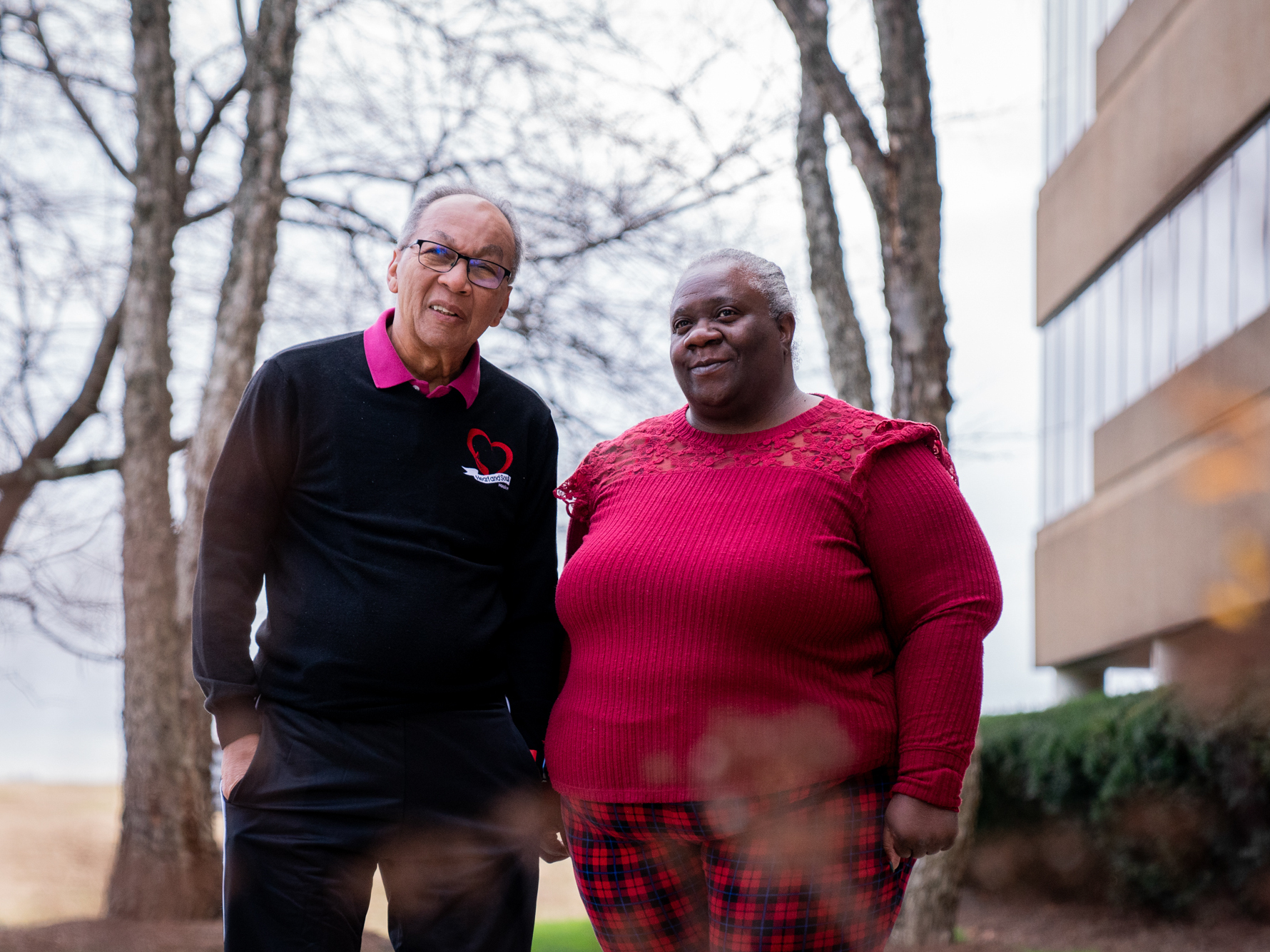 André Lee (left), Administrator and Co-Founder of Heart and Soul Hospice, stands with Keisha Mason, Director of Nursing, in front of their office building in Nashville, Tenn., on Dec. 20, 2021. Image: Erica Calhoun for NPR

“Many of them did not fully understand what hospice was,” she says. “They had many of the same sort of misperceptions.”

Whether it’s an upstart hospice company or one of the oldest in the country, everyone still has a lot of end-of-life educating to do to bridge the racial gap, Drayton says. “We’re not just handing out a brochure,” she adds. 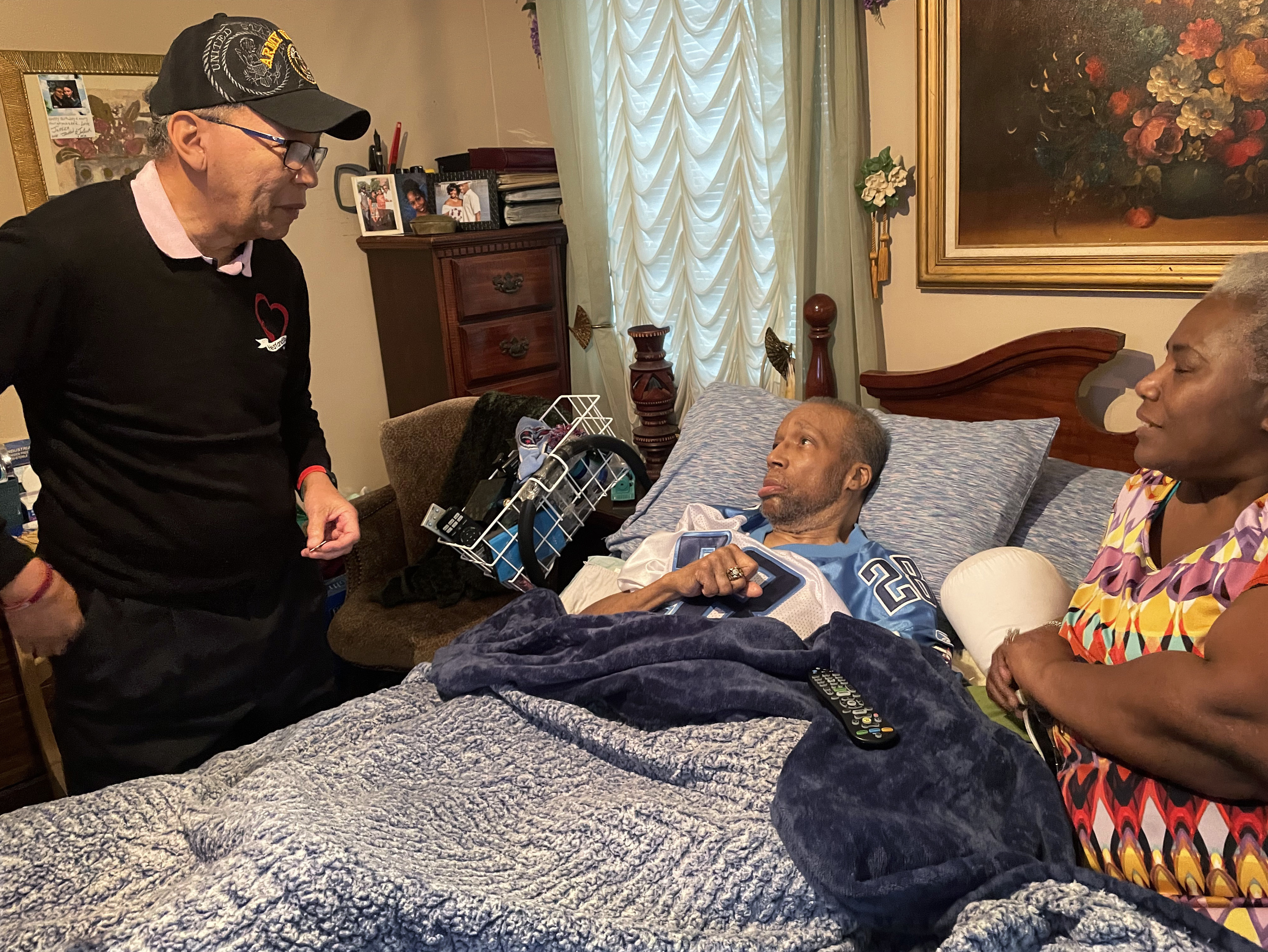 This story was produced in partnership between Kaiser Health News, NPR and Nashville Public Radio.

The Latest on the CDC, Covid-19 Guidelines, and Omicron: Live Updates

The Latest on the CDC, Covid-19 Guidelines, and Omicron: Live Updates