Like the size of thousands of its events, the trade show market is massive. According to the Center for Exhibition Industry Research (CEIR), trade shows contribute more than $80 billion annually to the U.S. gross domestic product, making the sector almost as large as the gambling, amusement and recreational industries.

And even in this age of increasing electronic correspondence, the trade show industry witnessed 25 consecutive quarters of growth through the end of 2016 – reinforcing the value of face-to-face interaction for businesspeople of all ages.

>>Don”t Miss: How to Build Your Trade Show Booth Sales

“Trade shows are temporary marketplaces that serve as a bridge between digital marketing and one-on-one business relationships,” says Nancy Drapeau, senior research director for CEIR. To make a deep impression on visitors at these shows, exhibiting companies can use well-conceived giveaways and gifts that match a particular branding message, as well as employee apparel that reinforces brand quality in attendees’ minds.

In fact, promotional giveaways are a draw for attendees; Drapeau notes that about 50% of millennial professionals surveyed by CEIR say they look forward to receiving items during a show. “These people want educational and interesting experiences, and the products they get are part of that experience,” she notes. As a result, distributors are in a prime position to serve a consultative role with their exhibiting clients and provide goods to maximize the effectiveness of their trade show presence.

Quality Over Quantity
While it can be tempting for clients to purchase and logo as many small items as possible for use at a show (and for distributors to sell as many as possible to clients), “I tell clients not to buy things that will just end up at the bottom of a few thousand attendee bags and mostly discarded at day’s end,” says Dean Caravelis, CEO of Blezoo (asi/141407) in Orlando, FL. Formerly a CMO for a few large firms outside the industry, Caravelis advises instead that clients purchase items from the upper end of the value category and match them to a specific theme they want attendees to remember. “Fewer items at a higher price point can bring a great return on investment if there’s some deeper thought behind what you do,” he notes.

For instance, sunglasses, pens and small insulated bags are typical giveaways that can make a much stronger impact with better quality and a clever theme. Linda Stephens, a Denver-based brand specialist at HALO Branded Solutions (asi/356000), procured sunglasses that match the exhibitor’s brand colors and have a message about visionary service printed on the arms. In a similar vein, she recently purchased several hundred illuminating pens that backlight the client’s logo when the user presses the button to write, with a tagline printed below the logo referencing the company’s bright employees.

At MARCO Ideas Unlimited in Portland, OR, owner Nancy Gudekunst gathers ideas throughout the year that would work for exhibiting clients. “We pay attention to their customer base so we know what would intrigue or excite them, but we present those ideas only when the client starts preparing for a show,” she notes. “This way, our good ideas seem timely and don’t get lost in the mix earlier in the year.”

On the other hand, sometimes a client provides a good idea that Gudekunst simply has to follow through on. For an aircraft industry supplier that knew their customers loved the large, heavy-fabric tool bags found in their workplaces, she had to source and custom-design a miniature version of those bags for personal use. The client paid $10 apiece for 2,000 mini-bags and was delighted by the response. “The large bags are immediately recognizable in that industry,” says Gudekunst, “so when people saw a miniature version on the show floor, they did a double-take.”

When using products that are more costly than typical show giveaways, however, exhibiting companies must have a protocol for who is eligible to receive an item. With the miniature bag, “the exhibitor was not going to set them on a table for any booth visitor to take,” Gudekunst adds. Instead, company reps could give them to existing clients as well as prospects they had a meaningful interaction with and collected contact information from.

Allison Peters, director of accounts for Icon Blue (asi/229398) in Los Angeles, has fulfilled orders of more expensive giveaways for an exhibiting company’s executive to personally present to larger clients and promising prospects wherever he encounters them. “The items must be small enough to fit in a briefcase so the executive can bring them everywhere, including receptions and dinners,” she notes. One recent example: A construction company manager – wanting something different than currently popular items like tumblers, power banks, journals and more – decided to spend $60 apiece for 60 unisex watches from Logomark (asi/67866). With the company’s logo printed modestly on the face, the watches would be worn in both business and personal settings. “It definitely set the firm apart in the minds of some influential people,” Peters says, “so the company felt it was worth the investment.”

Pre-Show Promises
Another way to get the right products into the right hands is through pre-show mailers. At Blezoo, Caravelis will often send “lumpy mailers” to the client’s targeted email database to persuade people to come to the booth. “I would much rather send 250 mailers that cost $20 each to pre-qualified people than spend that $5,000 on 2,500 generic logoed items,” he says. “We’re getting our clients to buy into these campaigns more often now because we choose a product that’s relevant to the prospect and also ties into the brand message – and the return on that spend is becoming clear.”

For a virtual payments company that wanted to convince CFOs its product eliminates the need for paper checks and plastic credit cards, Caravelis sent out a logoed pair of multipurpose scissors ahead of the show to pre-qualified people (as well as after the show to selected booth visitors) in a custom box lined with fitted soft foam and accompanied by a heavy-stock card. “Sometimes the packaging costs more than the product, but it’s that important,” he says. “Don’t waste your money on doing it if you have to skimp on the product, the graphics or the presentation. The impression has to be right in all aspects.”

Gudekunst has had success with using decorated socks as a giveaway, but in an interesting way: She mails one sock to specified clients and prospects ahead of the show, with the promise of getting the other sock when they come to the show booth. “They work great,” she notes. “For people with desk jobs, the dress socks are more desirable; for people in active jobs, athletic socks are better. The graphics have to sell it so people want to come for the other one. You can stitch all over a sock, so there’s lots of creative opportunity.”

Prospects can also be drawn to a show booth through the use of games and contests that come with prizes. CEIR’s Drapeau notes “our research finds that attendees engage strongly through a gaming experience; more than two-thirds of exhibitors who use them say they get high attendee interaction.” It could take the form of a skill challenge; one exhibitor had booth visitors watch a scene on a virtual reality headset and then answer a question about when and where they saw the company’s product. Alternatively, a game such as a spinning wheel or beanbag toss can use differing tiers of gifts as an enticement for visitors to interact and provide their contact information and potential needs.

End-of-day drawings for higher-end products can also move the needle on booth attendance – and by asking booth visitors to drop their business card into only one of a few boxes that offer different prizes, exhibitors gain valuable information on prospect quality. Gudekunst does this in her own firm’s show booth. “The prize they seek tells us what level of decision-maker they are,” she says. “If they go for the prize that would benefit their business, like a logoed table umbrella, then we follow up sooner with them than with those who enter to win the insulated cooler.” However, the people who enter to win the cooler, a quarter-zip windbreaker or other lifestyle item can still produce a referral to a decision-maker in their firm.

Although T-shirts are notoriously tricky to use as giveaways because of the variety that’s necessary for attendee satisfaction, “a lot of clients are asking for them,” Gudekunst notes. “If they’re good quality and the graphics are unusual and cool, recipients like them.” 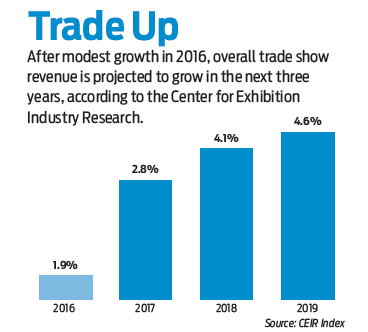 HALO’s Stephens recently used a pre-mailer to entice an exhibitor’s clients and prospects to come by the booth. Visitors were promised a fashionable gift during the time when the exhibitor would unveil a new product. To connect with the theme of a product reveal, Stephens used a butterwash-fabric retail-style shirt from T-Shirt Tycoon Solutions (asi/87000) that was decorated from the inside so that the logo bled through in distressed fashion, while the custom tag featured the new product’s name and the firm’s mission statement. “People will definitely wear this shirt because of its retail quality,” she notes.

Dress for Success
Icon Blue’s Peters closed an order in early September of 300 unisex polos for a client’s exhibit booth staff to use throughout 2018, but “they were super picky and went through 20 different samples before deciding on a Cutter & Buck (asi/47965) piece with a zip-up front rather than buttons.” Given that the firm has a progressive reputation in its industry, the use of a zip-up polo was consistent with their image. What’s more, the firm not only embroidered a left-chest logo, but also a large two-word statement between the shoulder blades on the shirt’s back. “They wanted to stand out, be different and be remembered,” Peters says. “They made the letters on the back two inches tall so the message could be seen from a distance.”

Taraynn Lloyd, VP of marketing for Edwards Garment (asi/51752) in Kalamazoo, MI, says lightweight acrylic/nylon sweaters are becoming more popular for shows because “they pull both male and female reps together and you don’t have to iron whatever you’re wearing underneath. We’re also seeing more dress shirts that are fancy, with stripes and even plaid. The bottom line is that you want your people to stand out so that booth visitors know without hesitation who they should approach.”

Stephens adds that “the key word right now is ‘sporty,’ so I’m seeing more orders for quarter-zip pullovers from Under Armour and similar higher-end brands.” In fact, for clients who don’t want to spend $120 or more for three shirts per person, a single performance pullover at $45 to $70 per person makes for an easy entry point.

Some exhibitors get even more creative with booth apparel for maximum effect. Gudekunst recently procured a few dozen lab coats for a product exhibitor at a science conference where attendees are the ones who typically wear lab coats. “We just wanted to catch attendees’ eyes as they walked the floor, and have them think it’s clever,” she says. “It worked.”

Rob Carey is a contributing writer for Advantages.

Lou Scheinfeld brings Spectrum back to life in book ‘Blades, Bands and Ballers’,

Lou Scheinfeld brings Spectrum back to life in book ‘Blades, Bands and Ballers’,

Happenings: Our February Calendar of Events

Decent work in Burkina Faso is a work in progress, but more vital than ever after the coup

Happenings: Our February Calendar of Events

Decent work in Burkina Faso is a work in progress, but more vital than ever after the coup