The Best Things to Do in Metro Phoenix This Week

There’s only a couple of weeks until 2022, but that still means there’s plenty of time to get out and have fun before the new year begins.

This week, you can see art in Scottsdale, do some meditation under the moon, watch a wrestling match, and much more.

Check out the new “Treasures” exhibit at the Musical Instrument Museum.

Whatever your taste in contemporary music, you can’t help but marvel at the way music has been such a central facet of the human experience throughout history as we know it. Get a feel for the grandeur of it all by taking a curator-led tour of the new “Treasures” exhibit at the Musical Instrument Museum, 4725 East Mayo Boulevard, where you can explore 80 extraordinary instruments from the museum’s own expansive collection and another 20 on loan from other cultural institutions. Exhibited objects include a trumpet that may have been played during the ancient Olympic Games in Greece, a piano that debuted along with the Eiffel Tower, and Aztec drums played during the time of Emperor Moctezuma. The tour is free with admission to the exhibit, which is $10. The next tour happens at 2 p.m. on Thursday, December 16. Sign up online to be sure you get a slot, and remember that you can buy a general admission ticket if you want to explore the whole museum while you’re there. Lynn Trimble

It’s not every day you get to use the word “cadence,” which is a fancy way of describing a sequence or repetition of notes. It’s a word that’ll come in handy as you’re thinking about artworks on view at Bentley Gallery, where artists working in a variety mediums use pattern and repetition to fabulous effect. Head over to the gallery, 215 East Grant Street, this Friday night, December 16, between 6 and 8 p.m. if you want to enjoy the free opening for the “Cadence” exhibition featuring works by Michael Marlow, Mark Pomilio, Travis Rice, Jeremy Thomas, Denise Yhagmourian, and Eric Zammitt. They work in a wide array of mediums, including plastic, charcoal, steel, paint, acrylic, fiber, and more. The gallery is also opening its “Thiewes” exhibit that night, which makes it a great time to explore the local arts scene. Of course, several other galleries will be open during Third Friday, so leave some extra time to pop into a few more creative spaces while you’re out and about soaking up all that culture and conversation. Lynn Trimble

Halls aren’t going to be the only thing getting decked this time of year. The spandex-clad competitors of Sonoran Championship Wrestling, for instance, will trade punches (not to mention body slams, suplexes, and piledrivers) inside the squared circle on Friday, December 17, at Winter WonderSLAM. Season’s beatings will take place during the two-hour card at Templo Emanuel, 3101 West Palm Lane, which will feature several hard-hitting and action-packed bouts. Announced matches include the high-flying EJ Sparks taking on Jay Smooth, a battle between Thugnificent and “Love Gun” Joey Hendrix, and a women’s contest featuring Ashley Grace versus SOS. The main event will see more than a dozen other local wrestlers duking it out in a “championship rumble” for a guaranteed entry into an upcoming tournament for the SCW title. Bell time is at 7 p.m. Tickets are $12 for general admission, $15 for front-row seating, and $10 for kids 5 to 12. Benjamin Leatherman

Support the independent voice of Phoenix and
help keep the future of New Times free.

Check out the artwork while you’re attending the free holiday market.

We all know it’s been a tough year for small businesses, including all the artists, artisans, and makers who’ve had fewer opportunities to show and sell their work. If you love to shop local and you like the idea of supporting the creatives in our midst this time of year, be on the lookout for local markets happening around town in coming days and weeks. Great choices include the Christmas Market coming to FOUND:RE Phoenix, a boutique art hotel located at 1100 North Central Avenue, from 6 to 9 p.m. on Saturday, December 18. The free event will feature art, jewelry, home décor, and other gift fare made by local artisans and designers. While you’re at the hotel, take time to check out works by local artists exhibited throughout the first floor, because it’s a fun way to see a diverse group of paintings, sculptures, photographs, and more. Keep an eye out for other markets happening this weekend as well, so you can support local arts and culture while you shop. Lynn Trimble

Watchu know about wushu? No, not the catch-all term for all Chinese martial arts that dates back centuries. Instead, we’re referring to the contemporary sport of wushu, which draws from Chinese fighting styles and involves competitors engaging in elaborate routines of martial arts moves (called taolu) or full-contact sparring with or without weapons (also known as sanda). Both disciplines will be on display at the Phoenix Wushu Nationals on Saturday, December 18, and Sunday, December 19, at the Phoenix Convention Center, 100 North Third Street. It will feature competitors from around the world who (depending on their wushu discipline) will show off their moves or spar against fellow combatants in various styles ranging from Shaolin Kung Fu to Chāquán. The two-day event will also include an Asian cultural festival, martial arts tournaments, a lion dance competition, and more. Hours are from 9 a.m. to 8 p.m. each day. Admission is $15 per day or $25 for the weekend. A full schedule is available here. Benjamin Leatherman

You’re probably used to drinking mimosas during weekend brunch dates with friends, but have you ever considered mixing mimosa time with something a bit more creative? There’s a creative space called Sunshine Sunflower, 700 West Campbell Avenue, where they do something called a Mud & Mimosas Wheel Class. Basically, you get to try your hand at throwing clay on their ceramics wheel while you enjoy the iconic sparkling mix of Champagne and orange juice that’s bound to boost your creativity. The next class happens from 10 a.m. to noon on Sunday, December 19. It’s a relaxing way to spend time with friends, or go it alone if you just need to destress and work out a bit of that holiday harried feeling in a positive environment. The class costs $55, but discovering your own inner artist might just prove priceless. Lynn Trimble 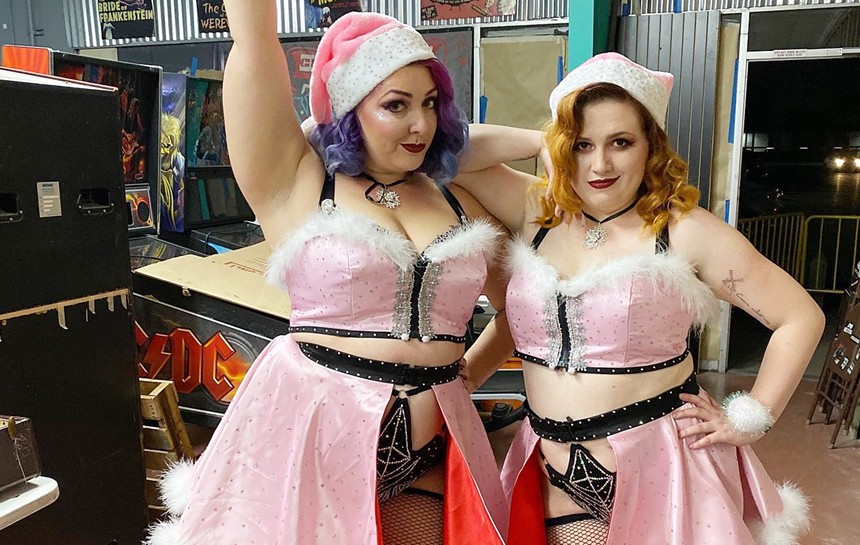 Santa will have to make room on his naughty list for Luna Lovebutton, Pepper Mint Schnapps, and the other burlesque artists of Three Fates Revue after they get nerdy and dirty during the Island of Misfit Toys showcase on Sunday, December 19, at Cruisin’ 7th, 3702 North Seventh Street. Schnapps says the local ecdysiast troupe will present an “oddball show full of sexy, nerdy acts,” including burlesque versions of Cookie Monster (weird), that one scene from EuroTrip where a sleaze-rocker Matt Damon sings “Scotty Doesn’t Know” (weirder), and a sexy Dolores Umbridge from Harry Potter (weirdest). Like the old saying goes, different strokes for different folks. Doors are at 4 p.m. and the show starts at 5 p.m. Tickets are $15 to $20. Proof of vaccination is required to be able to purchase drinks. Benjamin Leatherman

Enjoying the serene landscape at the Japanese Friendship Garden.

Talk of space exploration abounds these days, as technology pushes the limits of human imagination, and the subject of the moon remains a perennial pop culture favorite. Consider the case of David Bowie’s Moonage Daydream or the classic flick 2001: A Space Odyssey. Most of us will never get there, but we can still experience the wonder that comes with spending more time under the moonlit sky. There’s a unique way to do just that at the Japanese Friendship Garden, 1125 North Third Avenue, when Jude and Frankie of Biophilia lead their calming Moon Meditation with instruments such as chimes and an ocean drum. Their next workshop at the garden takes place from 7 to 8:30 p.m. on Monday, December 20. Admission is $50, and you should be sure to bring along both water and a yoga mat or towel. You might leave inspired to go home and make a moon-themed playlist to help you focus more on nature during the hectic holiday season. Lynn Trimble

Luminarias in the Garden

After enduring another scorching summer, we’ve all earned a wonderful reward: the ability to brag to all our East Coast friends about warm summer nights and desert plants decked out with holiday lights. While you’re out enjoying all those Christmas lights around town, don’t forget about the amazing display of luminarias the Desert Botanical Garden puts on each year. It’s one of the Valley’s beloved holiday traditions, and it makes a great break between all those errands on your December to-do list. Las Noches de Las Luminarias includes thousands of lights. You can go online to reserve a spot on Tuesday, December 21, when event hours are 5:30 to 9:30 p.m., and the event is silent rather than accompanied by live music. General timed-admission tickets are $49.95, and there’s no extra charge for the thrill of sending photos among the winter cactus to your friends living through freezing, snowy weather. Lynn Trimble

Amid all the rancorous politics, it’s sometimes hard to find your sense of humor. Get a little jumpstart at Scottsdale Museum of Contemporary Art, 7374 East Second Street, Scottsdale, where you can see soft sculptural pieces imbued with both humor and smart social commentary. They’re the work of Mimi O Chun, a New York-based artist whose subject matter for this show ranges from overconsumption to the prevalence of illusions. The artist worked during the pandemic to create the new works shown at SMoCA, which is presenting her first solo museum exhibition. Look for her crab peeking out of an Amazon envelope, her giant soaps strung on a rope, her oversized dinner plate, and her pigeons suspended from the ceiling. There’s plenty here to stimulate deep thought, but also a real sense of whimsy that you might find lacking in much of your everyday life. Holiday hours on Tuesday, December 21, are 11 a.m. to 5 p.m. General admission is $10. Good news for Christmas procrastinators: The museum gift shop has a terrific selection of gift items, including several created by local artists. Lynn Trimble

Scene from Ib Andersen’s The Nutcracker, performed by Ballet Arizona.

When you want a lovely bit of escapism in the form of storytelling and dance, turn to Ballet Arizona to transport you to another world with The Nutcracker. It’s choreographed by artistic director Ib Andersen, who adds layers of meaning and nuance to the familiar tale, so you always leave with a sense of curiosity and wonder. It’s being performed with live music by The Phoenix Symphony, which makes the experience even more magical. Get ready for dancing mice, toy soldiers, winter snowfall, and merriment, as you watch Ballet Arizona bring this timeless tale to life using more than 100,000 Austrian Swarovski crystals and more than two dozen enchanting backdrops. There’s a 7 p.m. performance on Wednesday, December 22, at Symphony Hall, 75 North Second Street. Ticket prices vary. Lynn Trimble