The author and her husband work in partnership with family on a 100-cow dairy in St. Charles, Ill. 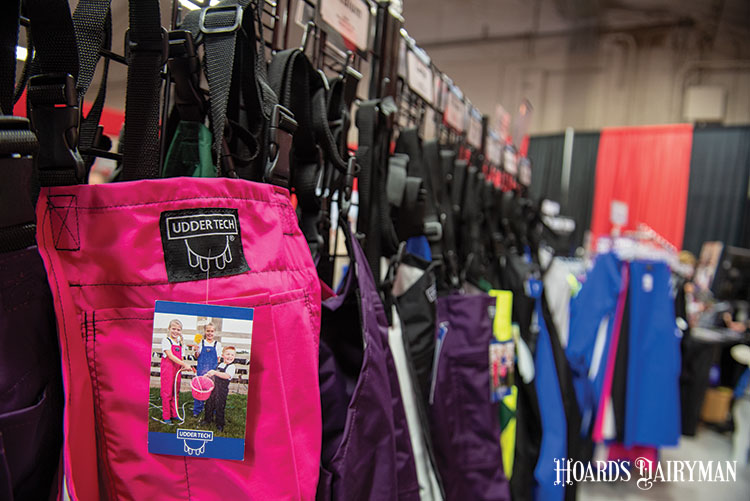 Udder Tech’s bibs are often spotted in barns throughout the country.

In her trade show booth at World Dairy Expo, you’ll find Minnesota-native Cheryl Mohn. She is the founder and president of Udder Tech Inc. — a family-owned and operated outfitter of farming gear designed to help make jobs easier, faster, and cleaner.

Mohn and her team stand among clothing racks in Udder Tech’s booth space, which showcases everything from bib overalls and aprons to milking sleeves and artificial insemination vests. The full-service storefront welcomes a steady stream of people, including dairy farmers, A.I. technicians, veterinarians, hoof trimmers, consultants, and more from around the world.

Some come with a list in-hand of the items they intend to purchase; others try on merchandise to find the perfect fit before making their decision. “Many people, both new and current customers, want to touch and feel the product and try things on,” said Mohn. “We encourage them to take the opportunity to do so.”

In 2019, Udder Tech celebrated 25 years of being in business and 25 years of exhibiting at World Dairy Expo. The milestone provided Mohn an opportune time to reflect on the company’s journey from a single-product start-up to an internationally recognized brand. Mohn credited exhibiting at World Dairy Expo with helping build her business. The event provided the connections needed to curate the brand’s product line and a venue to meet with customers from around the globe. 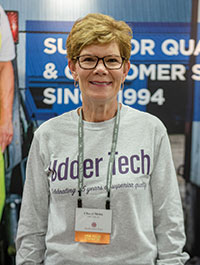 In the spring of 1994, Mohn and her husband, Bruce, were milking 50 Holsteins in Lakeville, Minn. While milking, Mohn noticed she was spending a significant amount of time walking to the supply cart between every cow for paper towels. She began thinking about how she could put her sewing skills to work to create something wearable to hold and dispense the paper towels.

The idea became Udder Tech’s very first product — the Towel Tote. It was a pouch worn around the waist with a loop on each side for teat dip cups. After a successful trial at their home farm, Mohn sewed several more Towel Totes. She chuckled as she recalled handing the denim, home-sewn totes out to neighboring dairy farms.

“I explained it would save them time during milking by keeping paper towels and teat dip at-hand, but they were all skeptical. When I went back a few weeks later, everyone was using it.” Their positive reaction made Mohn believe there could be an opportunity to market the product.

Mohn met with a business consultant and chose the company name Udder Tech to represent the products the company would offer dairy farmers. With the newly formed business and udder shaped logo complete, Mohn took the next step by exhibiting at a trade show. World Dairy Expo was the logical choice to debut her Towel Tote, she said.

She, along with a friend, decided to split the cost of a 10-foot booth space in the outdoor tents. Mohn’s first World Dairy Expo wasn’t successful — at least in terms of total sales. She recalled bringing 200 towel totes and only selling 20. “My friend, who had an embroidery business, was more successful. She made almost all the sales in our booth,” explained Mohn.

But, not unlike the dairy farmers she served, Mohn’s resilience and hard work would lead her to success. She understood her out-of-the-box product would take time to catch on. Mohn continued to exhibit at World Dairy Expo and year-over-year she went on to grow sales and expand the product line. According to Mohn, even though she didn’t sell a lot in those early years, she made a lot of contacts that would help her develop and refine future products.

Made for farmers, by farmers

“The key is listening to the customers,” Mohn explained. “World Dairy Expo is an excellent place to do that.” Mohn’s customer-driven philosophy traces back to the early years of Udder Tech. The second product Mohn brought to World Dairy Expo was waterproof gaiters.

While initially designed to be worn over your pants, Mohn talked with people who were putting them on their arms. It prompted her to go back to the sewing machine to develop milking sleeves.

The more she talked with customers and asked questions, the more the product line grew from direct feedback on customer needs. Dairy farmers saying, “We like the concept of the Towel Tote, but what do you have for cloth towels?” led to the development of Udder Tech’s bags and pouches. Then, customer feedback and further design experimentation would lead to the development of cloth towel aprons.

Over the years, Mohn would launch a new product almost every year at World Dairy Expo. From suggestions she received, she would pencil out a design and work on her sewing machine to turn it into a product. She explained, “I would make 10 or 20 samples of a new product to gather feedback and foster discussion.”

Showcasing new items at World Dairy Expo gave Mohn access to get her latest ideas in front of a diverse, global audience. “Sometimes, it would take additional refinement to get it right,” she added.

Mohn would debut her best-seller at the 2004 World Dairy Expo —waterproof bibs. Today, the bibs can be purchased in men’s, women’s, and kid’s sizes in a rainbow of different colors (including high visibility) and with the option for a mesh back.

“I continue to grow the business one product at a time,” said Mohn. She attributed innovation as the driving force behind their success. She explained it’s not difficult to find a new, viable idea for a product. However, creating the product, understanding its use in the industry, and marketing is critical.

While a few items have come and gone as needs have changed, Udder Tech still sells its original product — the Towel Tote. Udder Tech has also diversified its customer base beyond dairy farmers to include individuals involved in different facets of dairy, beef, poultry, and swine. The company’s product line includes more than 60 items encompassing everything from veterinarian tops to an egg-collecting pouch and calf blankets.

As the business grew, so did the booth space at World Dairy Expo. Udder Tech spent several years outside of the cattle barns in a 10-foot space that grew to a 20-foot space. In 2003, Mohn moved to the Arena Building. The move gave her a spot out of the weather to better display her products and gave attendees a nicer area to try the products on.

Even with the rise of e-commerce (Udder Tech launched online ordering in 2006), trade shows continue to be essential for the company. They are an ideal way to get the product into the customer’s hands, according to Mohn. “Not only can they try it on to ensure they find their size, but there’s also no shipping. Customers are excited to take home their purchase and use it,” she explained.

The company attends eight trade shows, including World Dairy Expo. “World Dairy Expo is our largest trade show,” said Mohn. “There’s a lot of work that goes into getting ready. We bring everything in our catalog to the trade show. It takes hours and hours to get the trailer packed.”

Mohn, along with a team of five, staff the booth each day. Each morning, before the trade show opens to World Dairy Expo attendees, they restock the clothing racks and stand ready to help anyone with questions.

“Helping people is rewarding to us,” said Mohn. Interaction with customers is central to their business. Even during their busiest days (Friday and Saturday), the team will take time to welcome new customers and talk to current users.

Over the years, Mohn has received positive feedback from customers. The company has built a strong following in the United States and has customers in 46 countries. The profound moment for Mohn came five years ago when a customer told her, “Thank you for making our lives easier.”

Twenty-five years and countless hours at the sewing machine later, Mohn said, “It’s still fun and rewarding.” World Dairy Expo attendees can continue to find the entrepreneur at the Udder Tech booth as she said she’s not planning to retire any time soon. You’ll likely find Mohn talking with attendees on the next new or reimagined Udder Tech product.